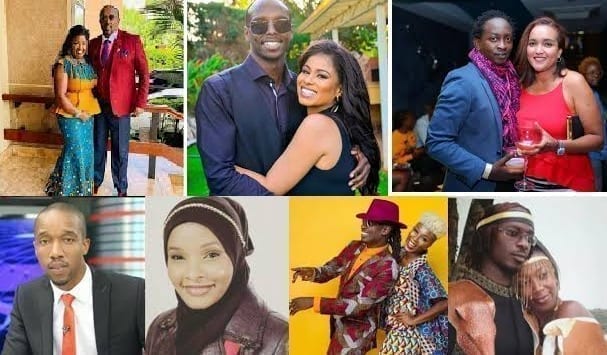 The concept of marriage has changed over time. In this age of failing marriages every now and the, there are lucky few who have figured it out.

Here is a list of five Kenyan celebrities that have proven that marriage indeed works and despite whatever hardships they might have experienced together, they managed to pull through and are still strong.

Of the 20 years veteran Kenyan singer-songwriter Eric Wainaina and Sheba Hirst have known each other as ‘besties’ they have been married for 11 years.

The couple tied the knot in February 2008 and have two daughters together; Seben, born in April 2006 and Neo born in October 2009.

Their marriage was however tested when Erick admitted to cheating on Sheba with former Tusker project fame contestant Valerie Kimani that resulted in the birth of a child.

“The biggest accomplishment for me, in tandem with my wife, is having saved our relationship from imploding. I learnt a lot of lessons about faithfulness. We live in a society where men have been raised to imagine that it is ok to have multiple partners and that your friends will keep your secrets for you,” said Wainaina after the incident.

The two are growing stronger in love with each passing moment.

Anytime you think of a Kenyan power couple, musician Nameless and his wife Wahu always make the list. The two dated during their university days, went on to get married and have been together in for 14 years.

During an interview on Radio Jambo, Nameless dropped some tips for the married folks on how to keep their marriages alive and kicking.

“Understand you are different. We struggled a lot especially at the beginning of our marriage and to make matters worse, we got married and my wife got pregnant almost immediately. You can imagine the hormones and all.

“Being in the public eye since both of our careers are centred on publicity is another challenge we had to tackle. We agreed to protect our family as we continued to pursue our careers and that has brought peace to both of us,” he said.

Nameless and Wahu have been blessed with two adorable daughters; Tumiso and Nyakio.

The couple, who co-hosts on Citizen TV, celebrated their 10-year anniversary about four months ago with Lulu appreciating her husband for always being her rainbow.

“The journey has been great because we are friends more than husband and wife. To the young people, don’t get married since you see my marriage as perfect, but instead know what you want to achieve from that marriage because people are different,” advised Lulu.

Lulu and her husband Rashid have been blessed with three children; two boys and a girl.

Celebrated media personality Julie Gichuru and her husband Anthony Gichuru have been married for a good 16 years. What’s the secret you ask?

“A successful marriage requires falling in love many times, always with the same person,” said Julie during their 16th anniversary.

Although Julie shies off from posting her children online, the mother of five goes all out for her husband. A close look into Julie Gichuru’s Instagram and you’ll fall in love with their chemistry.

The couple who celebrated their 23rd wedding anniversary have built a church together where they teach young couples the importance of marriage and how to make it work by example.

Not too long ago Bishop Allan Kiuna was diagnosed with cancer and not for a second did his wife leave his side as they had sworn, ‘For better for worse’.

“Regardless of how I felt, I had to show my husband that we would get through this and show strength even when it was hard and would later go on my knees and remind God of His promises most times with tears rolling down my face.

“In that season, I learnt to put the weight of my faith in God. It is easy to say “My faith is in God” yet still want to do things on your own and find other ways especially when you feel like God is “taking time,” she said.

Why Kisumu women want to marry men from other tribes