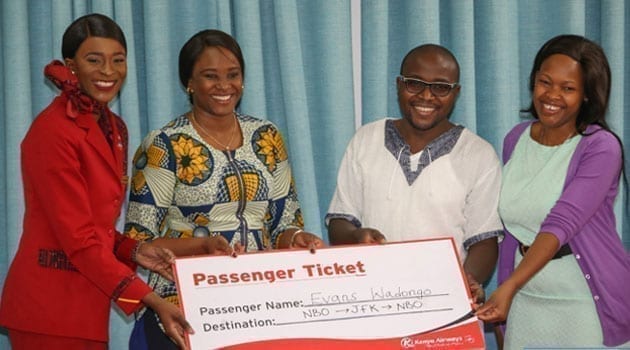 Kenya Airways Boeng 787 Dreamliner flight from Nairobi’s Jomo Kenyatta Airport to New York’s JKF International Airport will have on board two young innovators among passengers who will experience the direct flight.

Evans Wadongo and Shirleen Nafula will on October 28 fly in the airline before joining other passengers on a return flight on October 30 due to their innovation in biotechnology and solar energy which are among President Uhuru Kenyatta’s Big Four agenda.

Wadongo, a young engineer created a solar-powered LED lantern, Mwanga Bora which is set to interchange kerosene lamps and firelight while MS Nafula, a Bachelor of Science in Microbiology graduate from the University of Nairobi founded Crystal River Products a company which deals with production of bio-based beauty and hygiene products.

Kanze said that President Kenyatta believes the future of a country was purely dependent on young people adding that the two innovators were selected based on their tap into the President’s Big Four Development Agenda well as his effort to unite all young people in the country.

“They will be expected to report back over their experience and how the three-day exposure can benefit the youth,” held Ms Dena.

Wadongo’s organization Sustainable Development For All (SDFA) has been meting out thousands of lanterns across rural areas where electricity supply is poor well as sponsoring needy Kenyans with technical knowledge on how to manufacture and sell these solar lanterns.

Ms Muhati expressed optimism in the two young innovators assuming that they will learn, meet and network with other innovators and inspire more youths through their experience.

Kenya now joins a small group of African states who have direct flights to the US like South Africa, Nigeria, Senegal and Ghana.

Ethiopia is the only country in the region which makes direct flights from Washington D.C (IAD) to its capital, Addis Ababa (ADD) through Ethiopian Airlines.

Word of the Day:God’s Timing.

Mutua – I am Being Intimidated for ‘Unsettling the old Political Order’