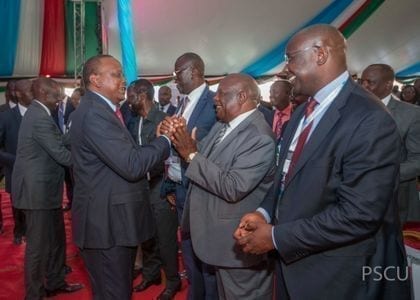 An agenda about President Uhuru Kenyatta’s pending retirement and his future in politics was cancelled following a call from State House on Monday, an intelligence officer close to DP William Ruto has claimed.

Over 90 legislators from the larger Mt. Kenya region gathered in Naivasha where they shifted focus development in their region, avoiding the initial plan to discuss geopolitics.

“I told you Uhuru isn’t interested in remaining in power. He knows of attempts to have him on the scene for long but he can’t play to that trap.

“Today, he asked them to limit themselves to development agenda only. That’s why they never spoke about his retirement. At least not for now. He strictly called Kang’ata (Irungu) and asked him to drop the agenda,” he claimed.

At Naivasha, Murang’a Senator Irungu Kang’ata confirmed that the agenda was dropped because timing wasn’t ‘ideal’.

He said: “We had plans to discuss constitutional changes. We wanted to explore whether we shall remain with presidential system or change to Parliamentary or consociationalism,” he said.

Earlier on Sunday, Kang’ata said Uhuru remains the region’s kingpin even after 2022, adding that he’s ‘too young to retire’.

Caucus chairlady Cecil Mbarire said the MPs only discussed the region’s development in which MPs asked the president to shift his focus there.

“Mt. Kenya contributes to almost 60 per cent of our GDP. The current administration has ignored the region despite voting for it. We want to see more on the ground.”

NO Crisis In Jubilee And No Parliamentary Group Meeting-Tuju