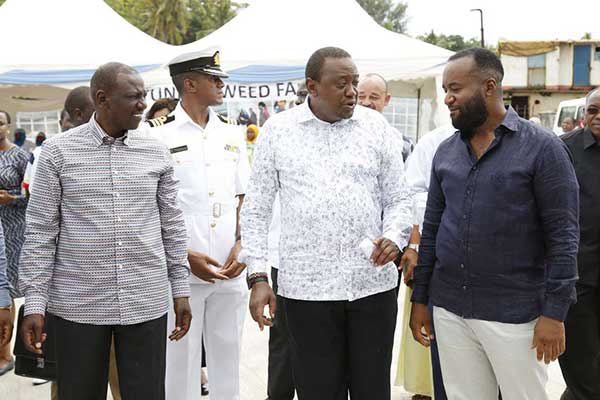 The businesses which had suffered due to Mr Joho’s rivalry with the Head of State are now coming up again.

The family is also said to have been offered space to establish businesses near the Inland Container Depot in both Nairobi and Naivasha.

The spaces are for the establishment of CFSs (Container Freight Stations) following the transportation of cargo via the Standard Gauge Railway (SGR).

“Things are now going on well. They will be up again. In fact, they have been offered space both in Naivasha and Nairobi,” said the source close to the Mombasa governor.

Mr Joho is a former critic of the SGR having maintained that it would kill businesses at the coast.

However, a photo of a banner bearing one of Mr Joho’s family companies — Auto Port Freight Terminal — was seen plucked on the SGR’s cargo train.

The other CFS company owned by Mr Joho’s family is Port Side which is also located near the port.

On Monday, a spot check by the Nation at Auto Port Freight Terminal along Moi Avenue found “normal” business activities with vehicles, guests and workers getting in and out of the offices.

“Things are just normal. Work is going on well, the focus of the company is to establish itself in Nairobi where business is now,” said the company’s insider.

He is noted to have said “it does not make economic sense to create a dry port when there is a seaport in Mombasa.”

“We will not cease from opposing any move aimed at taking away port services from Mombasa to Naivasha,” the county boss had said.

During the period, the governor’s family businesses were frustrated, faced numerous investigations by government agencies and tussled with Kenya Revenue Authority (KRA) over tax leading to closure of some businesses. The companies were later reopened after a court battle.

However, since the March 9 handshake between President Kenyatta and opposition leader Raila Odinga, Mr Joho opted to change his tune.

Instead, the erstwhile foes-turned-friends have embraced each other with Mr Joho publicly stating that he was now an influential person following his friendship with the Jubilee Party leader.

While in Mombasa during different events at Liwatoni and during a Jumuiya ya Kaunti Za Pwani Conference at Pride Inn Hotel, the two leaders exchanged pleasantries and cracked jokes showing they had since buried the hatchet.

The President showed up with Mr Joho in Mombasa a few days after they met in Paris, France.

The county boss, who is seemingly outshining other politicians in the coastal region has also said that his new friendship has “increased his chances of becoming the next president.”

Critics have, however, down played his remarks with some saying he will not have it easy going for the top seat.