ROSEMARY ODINGA CONDITION: IS THERE A LINK IN SNAIL FARMING?

The food we eat, the places we live in, and the people we interact with, not to forget snails, worms, mosquitoes, etc. can cause some of the common ailments that affect humans.

If you google and from a layman point of view, there could be a possible connection to her condition and the strange snail farming that Rosemary Odinga was introduced to by the former Nigerian President Olusegun Obasanjo.

“I started this project as a hobby in 2007. I had gone to Nigeria where I had the privilege of visiting former Nigerian President Olusegun Obasanjo, one of the biggest snail farmers there. I felt very challenged,” says Rosemary, eldest daughter of former Prime Minister Raila Odinga”.

The internet has volumes and volumes talking about parasitic snail worms that can cause brain tumor leading to blindness.

The worms can yield from snails and change to other dangerous organism that can affect the lungs and even the brain.

I will not go further to prove it but the internet reading is scaring and if it will not be a big problem it’s good if a biologist/scientist/ or appropriate discipline can be dispatched to Bondo to see if there is any danger the caged snails pose to human health.

“Symptoms may vary from none, to mild, to meningitis. Infection with Angiostrongylus cantonensis (rat lungworm) can occur after voluntarily or inadvertently consuming raw Giant African land snails, great grey slugs, or other mollusks and even unwashed fruits and vegetables”.

“The culprit, doctors said, was a parasite in the slug called a rat lungworm, which can burrow into the human brain.

Ballard isn’t alone, or even the only person infected on a dare—at least three reported cases involve boys or young men who were dared to eat a slug or snail. What’s more, the parasite is now spreading to new places around the globe.”

‘ Ocular parasitosis in human is more prevalent in geographical areas where environmental factors and poor sanitary conditions favor the parasitism between man and animals. In recent years, population shift and rapid transport have facilitated the spread of certain parasitic diseases from endemic to nonendemic areas. The routes of infection to man vary with species of the parasite and the animal hosts they infest. Lesions in the eye can be due to damage directly caused by the infectious pathogen, snail fetus, indirect pathology caused by toxic products, immune response incited by infections, or ectopic parasitism of the preadult or adult stages” 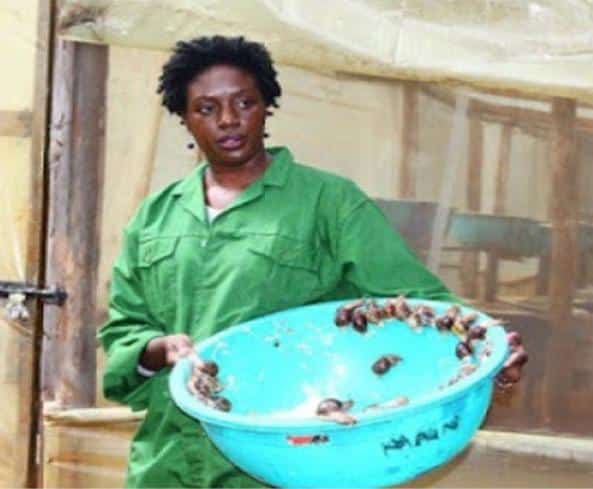