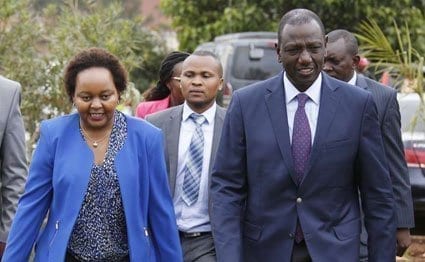 Kirinyaga Governor Anne Waiguru has called for a change in the Jubilee Party leadership in the wake of a political storm triggered by vice-chairman David Murathe, who scoffed at Deputy President William Ruto’s bid to succeed President Uhuru Kenyatta in 2022.

Speaking at a public function in Vihiga County on Wednesday, December 26, Murathe said there was no agreement that the Mount Kenya political bloc would support Ruto in the 2022 elections.

“We have no MoU with anyone that we will support them in 2022. If he has any deal with Uhuru Kenyatta, then that is an agreement between the two of them,” said Murathe referring to Ruto.

The Jubilee Vice-Chair further stated that Ruto should exit the political stage with President Kenyatta in 2022, a statement that appears to have rubbed the Deputy President’s supporters in the wrong way.

In a statement issued on Saturday, Waiguru said the Jubilee Party should hold elections “soonest possible” to reorganise the party and stem the growing divisions.

“It is imperative, and in order, that the Jubilee Party hold party elections soonest possible, to forestall internal divisions, and ensure that statements are made by Elected Party Officials, and that they infact represent the views of the Jubilee Party as a whole,” she said.

She added: “The Jubilee Party is the Ruling Party of The Republic of Kenya. The party must therefore always demonstrate Unity of purpose and exhibit its undivided support for the Big Four Agenda, Accelerated Development and Enhancement of devolution for the welfare of Kenyans.”

The Kirinyaga Governor further stated that Jubilee must support the Building Bridges Initiative adding the party needs “a leadership that has a legitimate mandate and the people’s support.”

In his address in Vihiga, Murathe also criticised DP Ruto’s move to oppose calls for a referendum saying it was a premature campaign as the Jubilee Party is yet to take a position on the said push for a constitutional change.

“Jubilee has not taken a position on the referendum. What are you opposing yet there is no question. Who is the fool here,” said Murathe.

A section of Jubilee Party leaders among them National Assembly Majority Leader Aden Duale and his Senate counterpart have since dismissed Murathe’s sentiments as a personal opinion.

By Benjamin Muriuki For Citizen Digital