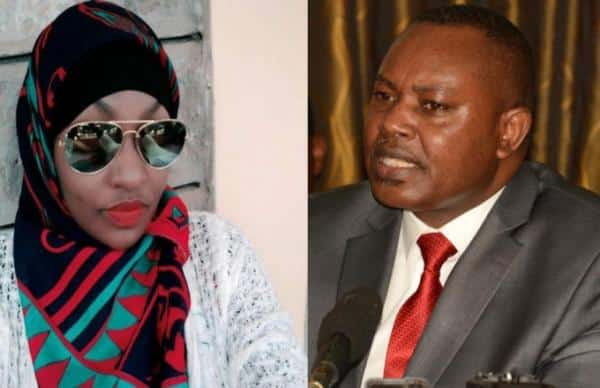 Wanted Al-Shabaab bride Violet Kemunto Omwoyo slipped out of Kenya a day before the terrorist attack on 14 Riverside Drive in Nairobi. A mobile signal of the phone she is using indicates that Kemunto is already in Somalia.

“The woman is not in Kenya, the mobile signal is locating her in Somalia,” a reliable security source told The Nairobian. There has been speculation that Kemunto was either killed or arrested after the terror attack, but security agents believe she’s in Somalia, probably plotting another escape after learning that her tracks have been uncovered.

“She can run, but she won’t hide,” said Directorate of Criminal Investigations (DCI) boss George Kinoti. It is suspected Kemunto is holed up in Somalia with El-Adde being her possible hideout location.

El-Adde, in southwestern Somalia in Gedo region, is close to the Kenyan border and is believed to be the fortress of Al-Shabaab – the ragtag militia claiming responsibility for the Riverside Drive attack which left over 21 people dead, including six terrorists.

An officer based in Mandera says the Kenyan side of El Wak in Mandera County is the preferred route for al-Shabaab fighters, who easily walk in and out unchallenged.

“There is a route in El Wak, which they routinely use. I will not be surprised if the woman used the same route,” said the officer. Another officer however was of the view that Kemunto could have used the Malindi route to enter Somalia.

“I doubt she sneaked through Mandera because of enhanced security in the area. Malindi remains a possible alternative,” said the officer.

Prior to the attack, Kemunto had sent her luggage by courier service to Mandera town. The baggage that contained personal items like clothes, was to be picked a day after the attack.

The luggage was sent from Eastleigh. Kemunto, however, failed to turn up to pick her luggage, prompting attendants at the courier service to alert police. It is believed she changed her mind for fear of being arrested. Preliminary investigations show the planning of the 14 Riverside Drive attack has footprints in seven countries.

Kemunto, a university graduate, was indoctrinated into extremism after being lured by terror networks. It is suspected she travelled by road, crossing over to Somalia a day before the complex was hit.

Before leaving the capital city, Kemunto met her mother in Ruai, informing her that she was on an undisclosed trip to celebrate her marriage anniversary “far away from Kenya”.

She travelled by road and crossed into Somalia a day before the terror attack Kemunto’s husband, identi?ed as Ali Salim Gichunge, is one of the five terrorists killed at the complex. The sixth, Mahir Khalid Riziki, blew himself up.

The identities of the other four terrorists remain unknown. Forensic experts are examining their bodies. Kinoti dismissed claims that the corpses are likely to be flown out of the country for further analysis.

“That is not true. We have the capacity to carry out comprehensive forensics. Once we are through, the bodies will be disposed of,” he said.

Kemunto and Githunge lived together in Mucatha, Ruaka, having moved into a house in Guango estate in March last year. Neighbours described her as a reserved woman who was always in a hijab.

Meanwhile, bodies of the remains of the terrorist suspects are being preserved until investigations are completed.

Forensic experts are collecting specimen from the bodies as well as conducting DNA analyses in a bid to crack their terror network with a view of establishing their associates, who are still at large and believed to be scattered in seven different countries.

“The bodies are species for investigations. They will remain with us for a considerable duration of time. We shall extract specimen from them, do thorough DNA analyses and take finger prints. The evidence will assist us to trace their associates, whether in Kenya or outside,” explained Kinoti. But the DCI boss was cagey about the whereabouts of Kemunto, only saying that:  “She is on our radar”.

Teams from the Anti-Terrorist Police Unit (ATPU) are said to be trailing the woman believed to be in her mid-twenties. She studied for a degree in journalism at Masinde Muliro University of Science and Technology (MMUST) and graduated in 2015.

She referred to herself as ‘al-Shabaab bride’ on her WhatsApp status. Kinoti is confident that upon completion of the investigations, security agents will dismantle local terror cells.

“Let me clearly state that they messed with the wrong guys. Things wouldn’t be easy or the same for them again,” vowed the top detective. Suicide bomber Riziki was on police wanted list since November 2014.

His wife Sahaila Bakari Mwinyi who is based in Mombasa was detained for one day in connection with the Nairobi attack.