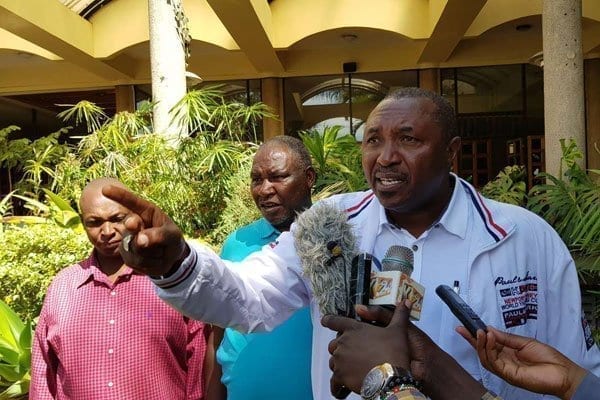 Bahati legislator Kimani Ngunjiri is of the view that President Uhuru Kenyatta will leave a bad legacy and the country divided if he does not disown Jubilee Vice-chairman David Murathe.

Mr Murathe has vowed to do anything to stop Deputy President (DP) William Ruto from succeeding Mr Kenyatta in 2022. His bid has resulted in division in the ruling coalition but the president has not addressed the matter.

In a rare bare-knuckle attack on President Kenyatta, the outspoken legislator said “Jubilee is not owned by a single individual and that is why I am now demanding for fresh party elections”.

Krinyaga Governor Anne Waiguru earlier called for this, noting the need to prevent division in the party and for the picking of leaders who can speak for the party.

This call was part of Ms Waiguru’s views on differences that have resulted from the 2022 succession debate, Mr Murathe having called for Mr Ruto’s retirement.

Mr Ngungjiri said, “Mr President, you’re going to leave behind a bad legacy if you leave the likes of Mr Murathe to spew toxic statements that will divide Kenyans just as end your second term.”

The lawmaker further said that if President Kenyatta is tired of leading the country he should call for elections.

“If Mr Kenyatta is tired of leading this country he should immediately call for fresh elections so that we can end this political romour-mongering,” he said.

The MP added that the head of State should carry the cross of incitement during past campaigns for derogatory remarks against National Super Alliance principal Raila Odinga.

“It is Mr Kenyatta who started abusing Mr Odinga by calling him a drunkard and a mad person,” he said in Nakuru town on Sunday.

But he also said, “If the president has joined ODM, please let him defect and go to ODM.”

The Orange Democratic Movement is politician Raila Odinga’s party. He and the president have been working together for national unity and development since their surprising handshake on March 9, 2017.

Mr Ngunjiri defended the DP against the corruption claims levelled against him but did not spare past regimes.

The deputy president has repeatedly denied the claims.

“Those whose fathers were presidents of Kenya in the past and looted this country … we shall revisit and expose them by their past records,” he said.

The member of parliament also pointed out that in that last two elections, the Kalenjin voted as block in support of Mr Kenyatta.

“The DP spearheaded the campaign in Rift Valley which saw Mr Kenyatta get overwhelming support. Mr Kenyatta should support his deputy because had it not been for his support, he would not have won the seat,” he said.

He touched on development, saying, “People in the Jua kali sector in Nairobi and saw millers in Nakuru and other parts of Rift Valley are crying. This government has not economically and politically helped members of the Kikuyu community to prosper.”

Mr Ngunjiri said Kikuyus will be branded political liars if they fail to support Dr Ruto.

“We live with other tribes in Rift Valley. One person should not come between the president and the DP and cause confusion,” he said.

The lawmaker noted that he fully supports the DP, not because of his tribe, but because he has the qualities of a good leader.

“It is President Kenyatta who started the 2022 succession talks during the last elections when he urged Jubilee supporters to support him for 10 years and then support Mr Ruto for the next 10,” he said.

Regarding the handshake, the MP said it is being misused as some of Mr Odinga’s supporters have issued threats.

He poured cold water on the handshake by saying, “The founding father, Mzee Jomo Kenyatta, who was Mr Kenyatta’s father, and former Presidents Daniel arap Moi and Mwai Kibaki experimented with similar handshakes but did not succeed.”

He added: “My dear president, are you more special than the past presidents who could not agree with some of the leaders you have embraced?”

He claimed Mr Kenyatta caused the mistrust between Luos and Kikuyus.

Police alarmed over increased cases of suicide in Homa Bay