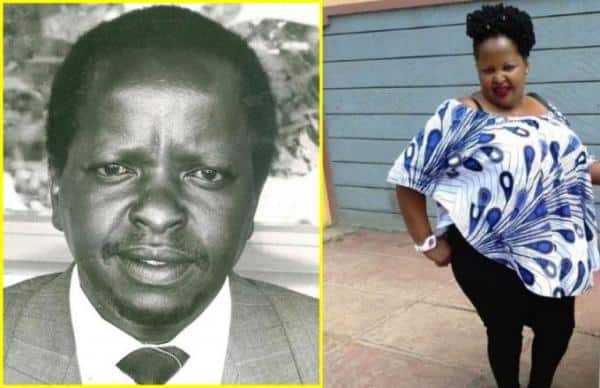 The brutal murder of Mary Wambui Kamangara a week ago rekindled memories of his firebrand father, the late Nakuru politician John Maina Kamangara- the man once accused of harvesting retired president Moi’s wheat.

Wambui, 39, was murdered in Kiambu and her body dumped in Juja within Kiambu County. Her husband, Joseph Kori Karue and his side chick, Judy Wangui Mungai, have since been held in police custody awaiting investigations.

Wambui was the fourth born daughter of the late Kamangara who died in 2001 aged 51 and was buried at the Nakuru North Cemetery on September 11 that year.

In his palmy days, Kamangara was not afraid of ruffling feathers with the powers that be during the single party days in the 1980s and early 1990s when his frequent brusque brushes with law enforcers, arrests, prosecutions and detentions left many mouths gaping and wondering whether he was an ‘enemy of the State’.

Kamangara, who had studied theology in Tanzania, had joined politics on the back of chairing the Rongai Kimangu Farmers Company in the mid-1970s when he became a Kanu youth winger.

Nakuru was the hotbed of Kenya’s politics and Kamangara was among a clique of local hot heads who were constantly under the radar of the dreaded Special Branch then under enigmatic spy chief the late James Kanyotu.

Since State House Nakuru was where the president sometimes carried state functions besides staying at his Kabarak farm, then elements like Kamangara would not operate without his name being whispered to the right ears. And not when you are accused of harvesting the president’s wheat!

Indeed, after opening the Nyayo wards at the then Rift Valley Provincial General Hospital in Nakuru town, Moi aide and one-time Kabarak Farm manager, the late William Lasoi, complained that Kamangara-who had leased a farm next to Moi’s- was harvesting Moi’s wheat alongside his own forcing the president to ask “Who is this Kamangara and who does he think he is?”

Shortly, Kamangara was among a clique of politicians and businessmen arrested, taken to court and charged with taking oath to topple the government as part of the outlawed Mwakenya Movement in 1986.

Come the early 1990s and Kamangara was often rounded up in a state- crackdown-against pro-democracy movement, the Forum for Restoration of Democracy (FORD) and ferried to Nairobi after which each was separately airlifted to their “home districts”.

The leader of FORD, the late politicians led by ex-Vice President Jaramogi Oginga Odinga, was flown to Bondo, Martin Shikuku to Kakamega, and Masinde to Kitale while Kamangara was flown to Nakuru.

They were charged simultaneously with treason or similar trump up charges.

And when Ford split to two, Kamangara led the Jaramogi faction while the rebel one, allied to ex powerful Cabinet Minister Stanley Matiba, was led by Francis Wanyange who later became elected Naivasha MP on Matiba’s Ford-Asili ticket.

Perhaps, Kamangara’s most memorable fame was a time when he, on behalf of the late Jaramogi, and before the splinter of FORD, organised what still remains probably the biggest ever attended political rallies. It was held at Afraha Stadium when the FORD wave was so high police were unable to stop the rally being held just two days to the 1992 General Election.

William Ating’ah, a former civil leader who was among the protestors recall that the General Service Unit (GSU) officers guarding State House, opened the gates flooding demonstrators inside.

But alas, when GSU reinforcement came in military trucks, gates were locked and merciless clobbering started with relentless zeal of the biblical Centurions. By the time the dust, nay teargas, had settled, only pieces of shoes, slippers and damaged bicycles were recovered from the scene which appeared like it been struck by a thunderstorm.

While Kamangara, then driving his convertible Toyota Celica, escaped the wrath of the paramilitary officers, George Kihara wa Willy recalls running so fast he found himself sharing a hospital bed with a patient at the nearby Nakuru PGH Annex Hospital where had sought refuge.

Kamangara was survived by two wives and seven children among them the now slain Mary Wambui Kamangara.