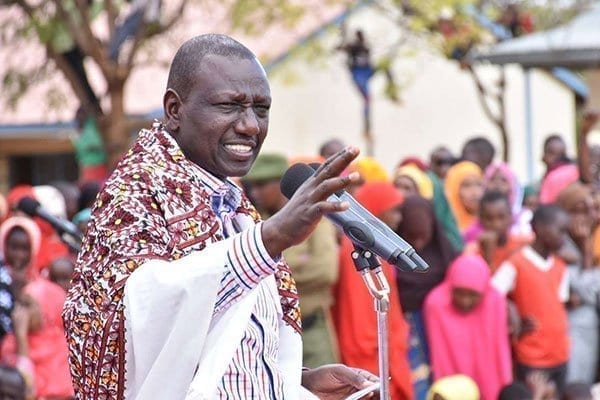 The President, in an event also attended by Mr Odinga, dismissed claims that the former prime minister is out to destroy the ruling Jubilee party following their March 9, 2018 political truce.

“Raila has never told me he wants to be President in 2022. Leave Raila Odinga alone. We are busy working with Raila and some people are busy campaigning for 2022.

“Raila tells me do this, and when I do it, it turns out to be even much better. Halafu unaskia watu wengine wanasema ati anavunja Jubilee. Raila anaingilia wapi na Jubilee” (you will hear some people saying Raila is dividing Jubilee. Where does he come in?) the President posed.

Even though it is not the first time Mr Kenyatta has defended his pact with Mr Odinga following attacks by the Ruto camp, it is a rare telling off at a time tension and uncertainty are rife in the Jubilee administration.

His off the cuff remarks were different from how he described the handshake during his State of the Nation address a fortnight ago – he did not mention Mr Odinga by name.

Mr Ruto has, at every available moment, been attacking Mr Odinga, accusing him of being behind the cracks in the ruling party.

Mr Ruto has often said that Jubilee is being assailed by outsiders whose main strategy is to weaken it from within.

He uses choice epithets to attack Mr Odinga in what has become a duel between the two and their key lieutenants.

The direct attack by Mr Kenyatta now puts Mr Ruto in an awkward position, as he is now faced with hard choices of firing a salvo at the President, playing down the remarks as he has often done in the past or remaining silent.

Presidents directly attacking their deputies is not unusual in Kenyan politics even though Mr Kenyatta and Mr Ruto came into power displaying close ties.

Mr Moi in the run-up to the 2002 General Election had quipped that “kuna tofauti ya urafiki na uongozi” (there is a difference between friendship and leadership) and ended by saying the mathematics professor could not be trusted with the country’s leadership.

Mr Moi, against the advice of his closest allies, ended up hand-picking a political novice — Mr Kenyatta — with disastrous results at the ballot.

Though the President is yet to publicly say that he won’t support Mr Ruto in 2022, there has been a noticeable rift in their relationship.

It’s not lost on keen observers that the president has refused to be drawn into 2022 succession politics.

Politically, the Deputy President has been living dangerously as he gets assailed from all corners and appears to contradict the President’s stand at times.

Were he to choose to reply to the President directly, it would put him at loggerheads with Mt Kenya voters, whom he has meticulously courted since the start of Mr Kenyatta’s second term.

By attacking Mr Odinga and not confronting Mr Kenyatta, the deputy president has sought to play victim and thereby endearing himself to Mt Kenya voters where the ODM leader’s support remains lukewarm.

The deputy president has previously weathered attacks by ignoring them or deflecting them to his own advantage.

But his close ally Soy MP Caleb Kositany said Mr Ruto has no intention of replying to the president.

“The DP will move on with his political strategy as it were, and that is to serve the people of Kenya. We still believe that the president was and still is genuine over the handshake, but Mr Odinga had bad intentions over the handshake. He was not genuine,” he said.

He cited the threat by Siaya Senator James Orengo to impeach Mr Ruto.

He also said the decision to label non-ODM contestants in the recently concluded by-elections in Ugenya and Embakasi South as stooges of Mr Ruto were examples of Mr Odinga’s bad intentions.

“The President may have wondered how Mr Odinga is dividing Jubilee, but then again the words and actions of his key lieutenants show that the handshake, as they understood it, was a plot to weaken the DP,” he said.

“The President’s words are important. He has to protect the handshake. And those remarks were aimed at that. It is enabling him to finish his term peacefully and with nationwide legitimacy. But I think the statement of reaffirming Jubilee should be construed positively by DP,” he said.

Suna East MP Junet Mohamed said the recent rhetoric on impeachment and the two by-elections were about “political seasons, which come and go”, and they cannot be said to be an attempt to break up Jubilee.

“The President talked about the bigger picture. He said he did not understand why Ruto had issues with Mr Odinga. Ruto should understand in the highly improbable outcome that he becomes President he would still be the leader of those he doesn’t like,” he said.

Whereas Mr Ruto may not take on the President directly, the other time a thinly veiled attack was thrown at him, he turned it to his advantage.

During a trip to Nairobi’s Eastlands last year the, President said his deputy’s main work is “kutangatanga” (loitering).

A few days later, the duo met at a function in Embu and Mr Ruto admitted that he loiters around, thus claiming the moniker “tanga tanga”.

But subtle messages are being sent to the DP using the levers of State power. On a visit to Nyeri on Thursday, Mr Ruto’s function at an AIPCA church was devoid of security.

County administrators gave him a wide berth, with government officials claiming that local police were not notified of the impeding visit early enough.

Recently, when the President called for a lifestyle audit of State officers, it was seen as an attempt to fix his deputy.

Instead of fighting the proposal, Mr Ruto expressed willingness to take part. The debate died down before the audit could be conducted.

The DP has expressed support for the war on graft despite his misgivings, especially in the wake of the dams scandal and allegations targeting him.

VIDEO:How the diaspora community can tap into Kenya’s property sector