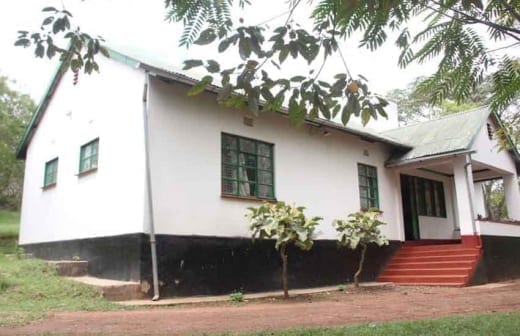 Inside look of the house: It is a building where the first president of Kenya Jomo Kenyatta stayed during his last days of detention in the year 1961. This is also the same place where President Uhuru Kenyatta was conceived.

Mzee Jomo Kenyatta lived here for one year after his transfer from Lodwar where he and five other politicians were detained in relation to the Mau Mau uprising. His family – Mama Ngina Kenyatta and daughters Christine and Jane Njeri – joined him.

In the house is a visitors’ book signed by President Uhuru Kenyatta on July 1, 2007 after visiting the house when he was a Member of Parliament for Gatundu and the official Opposition leader.

This building played a crucial role in the independence of this country as it became the centre of reconciliation for the founding father of the nation who had been mistreated and mishandled by the colonialists.

Welcome to Kenyatta House in Maralal. The three-bedroom bungalow in Samburu County was built in 1959 for senior colonial administrators who worked in Samburu.

The house, which is a historical monument, is located in a cool and serene environment in the dust town of Maralal.

Surrounded by trees, the house has a kitchen, a store, bedrooms (guest, master and children bedrooms), a washroom and a living room.

The curator of the house, John Rigano, said that everything in the house is the way it was back then, but the walls were painted in their original colours.

“Nothing has been replaced in the house but the walls were only painted in their original colours,” he says.

Though there is no electricity in the house, Rigano says the hooks on the walls of the house, suggest that lantern lamps were used to light the house.

In the kitchen is an oven, which used firewood and also heated water through a pipe connecting the rooms to the bathroom, which has a bathtub.

All the three bedrooms (guest, master and children’s) are fitted with wardrobes and spring metallic beds, with mattresses made of cloth and stuffed with sisal fibre.

Rigano says the guest bedroom, which is smaller than the rest, was meant for prominent personalities who visited Kenyatta during his stay in Maralal.

“Former President Mzee Daniel Arap Moi visited Mzee Kenyatta while in Maralal and he slept on the bed,” he says.

Other leaders who visited him in Maralal were Oginga Odinga, Ronald Ngala, James Gichuru and John Keen.

The master bedroom where Kenyatta slept is bigger and has a working desk facing the window.

The curator says Kenyatta sat here while he was finalising his book, Facing Mount Kenya. Currently, one cannot get a clear view of Mt Kenya because the line of sight is obstructed by trees.

“The trees in the compound were planted later but initially the vicinity was clear and bear with no trees and one could get a clear view of Mt Kenya,” he adds.

Also in the room is a dressing mirror and a charcoal iron box. Here, Rigano says, is where President Uhuru Kenyatta was conceived. Next to the house is a smaller building where Mzee Kenyatta’s two security guards lived. One of the guards, Rigano says, was Kenya’s first athletics gold medal winner, Kipchoge Keino.

Interestingly, most locals don’t think the house is special because they don’t know the history behind it.

“Some of the locals who are educated think that Mzee Kenyatta was imprisoned here while those who have not gone to school take it like just any other house. They don’t even bother to visit it,” Rigano explains.

He adds that the community is not aware that the person who resided in the house was doing so for the sake of Kenya’s independence.

Francis Lengapache, 59 and a resident of Maralal, says that he visited the place when he was a young boy but he never knew the history behind the house.

“I am not aware of the history behind the house but when I was a young boy, I used to graze our livestock in the compound,” Lengapache says.

The house, which is under the National Museums of Kenya, was gazetted as a national monument on January 14, 1977.