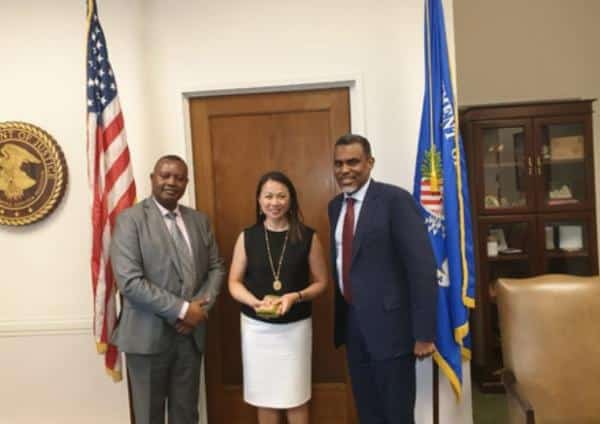 US to attach senior prosecutor in Kenya: The US has agreed to send to Kenya one of its top prosecutors to support the country in the ongoing war against corruption.

This was after the Director of Public Prosecutions (DPP) Noordin Haji and Directorate of Criminal Investigations (DCI) boss George Kinoti led a delegation for talks with Federal Bureau of Investigation (FBI) deputy director David Bowdich and US deputy Attorney General Bruce Swartz during their week-long visit.“United States Justice Department is set to attach a senior US prosecutor to strengthen the ongoing anti-corruption efforts. This was revealed by the US deputy attorney general Bruce Swartz during meeting with Kenyan delegation,” Haji said.The team also met with Head of Public Integrity Section at US Department of Justice, Ms. Annalou Tirol.

“Discussion centered on best practices in dealing with public corruption cases. She pledged continued support to the ongoing anticorruption efforts,” Haji said.In another meeting, FBI pledged its support in Kenya’s fight against corruption.At the meeting, which took place at the bureau’s headquarters, Bowdich also lauded the anti-corruption efforts by the two.“… Mr. Bowdich lauded the Anti-corruption efforts by the duo and promised full support from the USA Government,” the DCI stated through its twitter account.The discussions also touched on Anti-terrorism matters where the US promised to help establish a Joint Anti-Terrorism Task Force in Kenya.

Haji said the meetings will be crucial and helpful to the Kenyan team that is eager to learn much on issues that include money laundering and corruption at large.“We will come back richer and well equipped with knowledge on these issues disturbing us. Corruption is allover and need to be tamed,” he said.Kinoti is accompanied by officers from Anti-Terrorism Police Unit and others from his office. He said they are eager to learn from the best police outfit in the world.US ambassador to Kenya said in an opinion that the US has provided military, medical and disaster response training to Kenya.“Recently, we conducted a course for Kenyan law enforcement officers that taught prosecutors and police advanced techniques on how to disrupt terrorist incidents and successfully prosecute terrorists,” he said.

He added Washington committed to enhance counter terrorism, defence and maritime security assistance and will work with Kenya to help develop its new Coast Guard Service.Organized crime, drug trafficking and human trafficking and intelligence sharing will also be in focus, Haji said.Kenya extradited the Akasha brothers, Baktash and Ibrahim along with Gulam Hussein, a Pakistani national charged with heading a drug transportation network, and Vijaygiri Goswami, an Indian businessman accused of managing the Akasha organization’s drug business to the US in 2017 where the two are waiting to be sentenced over drug trafficking charges.They were arrested in Mombasa, Kenya, in November 2014 in a U.S.-led sting operation, in which authorities said the Akasha organization provided 99 kilograms of heroin and two kilograms of methamphetamine to DEA informants posing as drug traffickers.As part of a deal made in October with US prosecutors, each is facing a prison term that could range from 10 years to life.

The brothers agreed then to plead guilty to seven criminal charges, including bribing unnamed Kenyan officials.The terms of the agreement also indicate that the Akashas may each be fined up to $10 million (Sh1 billion) and be required to forfeit all the money obtained through their confessed drug dealings.The trip comes weeks after Haji led a similar one to UK, Jersey Island accompanied by Ethics and Anti-Corruption Commission boss Twalib Mbarak.