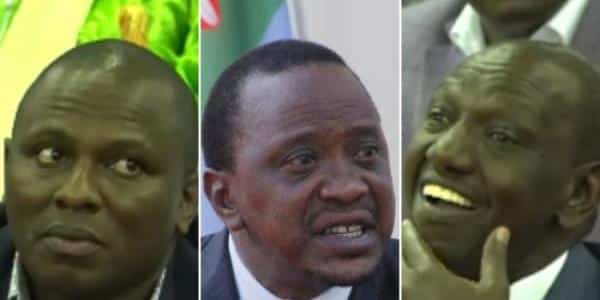 Facial Expressions From Ruto & MPs: President Uhuru Kenyatta’s angry outburst at Kasarani, on Sunday, caught many Kenyans off guard, more so, MPs who were being addressed.

During the address, the cameraman decided to shift attention from the president and capture how some of the politicians were consuming his speech.

At one point, Deputy President William Ruto was caught on camera laughing and occasionally bending over to his neighbours, perhaps to get a translation of Uhuru’s speech.

At another stage during the address, Ruto clasped his chin with his mouth wide open and looking around.

Gatundu South MP Moses Kuria is seen frowning as he tries to listen to both President Kenyatta and Homa Bay Woman Representative Gladys Wanga who was whispering something in his ear.

Kuria who appeared on Kameme FM on Monday morning expressed his views on Uhuru’s speech.

He admitted that indeed, something was amiss within Central Kenya’s leadership and something needed to be done.

He called the president’s address a sounding bell that the region’s leaders needed to meet and discuss serious matter pertaining to Mt Kenya.

He recalled a conference that retired President Daniel Moi had called for regarding the repeal of section 2A of the constitution at the same venue.

Despite many of Moi’s advisors and supporters opposing the repeal of the section that prohibited the creation of many parties, he went on and called for its repeal anyway.

Supporting the President’s call for unity in the country, he noted many of the people from the region were business oriented and traversed all parts of the country to conduct the same and therefore, need to be assured of safety wherever they go.

Video:Raila is a joker who will never be president – Miguna Miguna

THE MAIN KENYA OPPOSITION PARTY ” CORD ” POLICY OF NO, NO NO, IS…

Word of the Day:Speak your Faith

Top 10 Things Women Do To Destroy Their Marriage

When babies are up for sale, we have all sinned