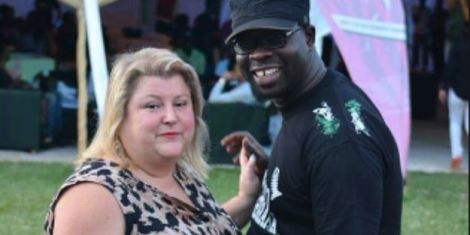 The widow was speaking at a memorial service held for Okoth at Starehe Boys Centre, where he was an alumnus.

She described her life with the late legislator as incredible adding that they had toured many parts of the world together and they were best friends.

“I have led an incredible life with Ken Okoth, lived in many parts of the world with him – we were truly best friends. Ken was ill in the last two years and it was sad to watch him suffer.

“Thank you all for your support and love,” she stated.

Monica revealed that she had known the MP for 21 years and first came to Kenya 15 years ago, “On my second day in Kenya, Ken brought me to Starehe Boys’ Centre.”

“I met Ken Okoth at the university; he was the only African student in our Austrian university and he became our student leader,” she added.

At the same time, the late Ken Okoth’s family announced that the former MP will be cremated at a private function in Nairobi.

During a press briefing at Silver Springs Hotel in Nairobi on Wednesday, ODM leader, Raila Odinga stated that the family members and a committee put together by the ODM party had agreed on a couple of things.

He disclosed that the body would be transported to Kabondo Kasipul Constituency in Homa Bay County, where a funeral mass would  be held at Got Rateng’ Secondary School.

Doubts on Sonko nomination of Miguna as deputy