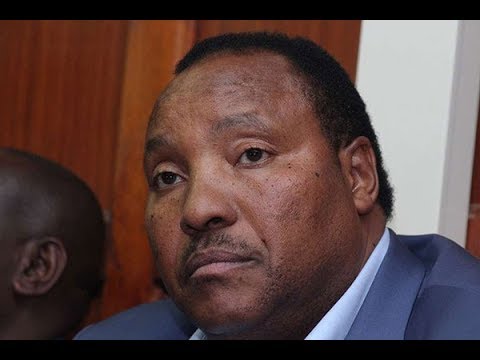 VIDEO: Kiambu Governor Waititu released on cash bail but barred from office- Kiambu Governor Ferdinand Waititu, who— alongside his wife and other county officials— is facing corruption charges over irregular award of tenders worth Sh588 million, has walked to temporary freedom after spending 48 hours in the cell.

However, he did not walk back to his corner office in Kiambu town on Tuesday after the Anti-Corruption Court in Milimani, Nairobi, ordered him to keep off.

Businessman Charles Chege, the owner of the company that was awarded the disputed tender, was released on similar bail terms.

In his ruling, Mr Mugambi said barring Mr Waititu and other county staff from accessing their places of work would ensure integrity of trial.

The magistrate also ordered all accused persons to deposit their travel documents in court, and directed the immigration department to confirm that some of the accused do not hold passports.

The court ordered the men and women suspected to have stolen from Kenyans not to interfere with witnesses or tamper with evidence.

The case will be mentioned on August 26.

The alleged irregular tenders were issued during procurement for upgrading of various gravel roads to bitumen standard.

The lock-out of Mr Waititu and his staff from their offices follows last week’s ruling by Justice Mumbi Ngugi affecting county bosses charged with economic crimes.

In the ruling, Justice Ngugi held that governors, just like other civil servants, should step aside once charged with criminal offences and their roles taken over by their deputies for the duration of the trial.

That effectively means that Mr Waititu’s deputy, Dr James Nyoro, with whom they have had a falling-out in the recent past, will be taking over the running of the central Kenya county.

The governor has severally claimed that his misfortunes were being orchestrated by his political enemies led by Dr Nyoro.