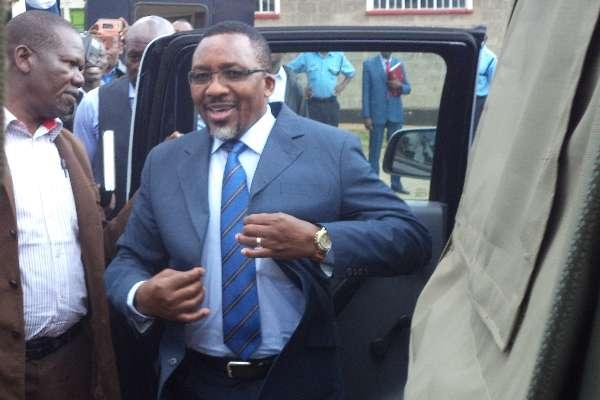 Pastor James Ng’ang’a of Neno Evangelism Ministries is once again in the eye of a storm.

The flock is unhappy about his threat to render men infertile for disrespecting him. But this time round, they are not turning the other cheek.

In a demand letter from their lawyers Otieno & Amisi Advocates, dated August 26, the church’s male congregants have accused the Neno founder of using obscene and abusive language to refer to them and denuded an apology or else…

“That on various dates you used threatening, abusive or insulting words or behaviour with intent to provoke a breach of the peace…and more particularly by using signs and language demeaning and/or derogatory of our clients’ sexual organs i.e. by equating the said organs to the index finger,” reads part of the demand letter.

The controversial preacher is also accused of using “abusive or insulting language, against our clients, who are essentially your employers by virtue of their tithes and offerings.

”The male congregants now want, Ng’ang’a to withdraw the remarks and apologise within two days or face defamation charges.

“Your actions aforesaid have lowered our clients’ image in the eyes of right-thinking members of society by painting them (the male congregants) as fraidy-cat cowards who are not only dimwitted and brainless,” the lawyers write.

The demand letter comes a day after Pastor Ng’ang’a apologised to Citizen TV journalist Linus Kakai for the death threats he made against his life in March this year.He made the formal apology before Chief Magistrate Patricia Gichohi at the Kiambu Law Courts.

In May Pastor Ng’ang’a, hit the headlines after a video of him spewing obscenities and warning bishops against disrespecting him and his wife went viral on social media.This saw one of the bishops at Neno, Robert Wafula resign.

He said he felt attacked and offended that a man he has known for more than 20 years would take to the pulpit and cast them in a negative light.“If he had issues with us, he should have called us for a meeting.

But declaring in public that he will kick us out means he no longer wants to work with us. I would rather leave than wait for him to do what he threatened,” says Wafula.Pastor Ng’ang’a is yet to publicly comment on the matter.