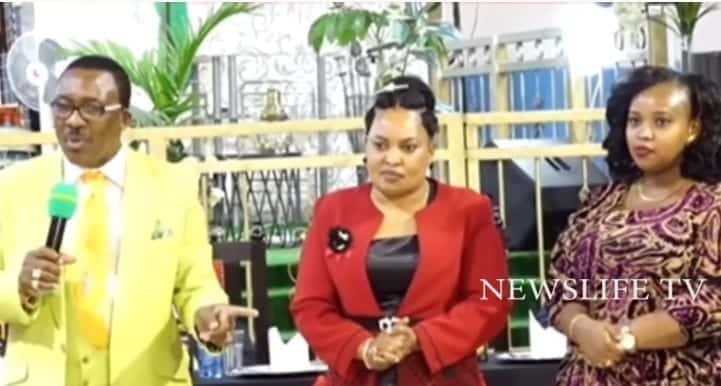 A full service at Neno Evangelism church with Pastor James Nganga. For one,pastor Nganga is very gifted with musical instruments and in this service ,one will understand why people still go to his church because he preaches with a lot of anointing.Before the drama,he makes a lot of sense.

Man of conflict? A peep into the world of Neno’s Pastor Ng’ang’a

Some worshippers at Neno Evangelical Ministries on Monday threatened to start a private criminal case against the church’s founder, Mr James Ng’ang’a, but given his brush with the law, the man of cloth will mostly not be his losing any sleep.

Pastor Ng’ang’a has been in and out of courts many times, and spent more than two decades in jail.

Though details he has been giving in recorded interviews vary, his first stint in jail was in 1972 when he was 18 years old. He was sentenced to a six-month jail term for fighting, as he told a local radio station on August 13.

But in a documentary published last year by Sasa TV, a television station owned by his church, Pastor Ng’ang’a said he was first jailed in 1968, when he was supposedly only 14 — having been born in Subukua, Nakuru County, in 1954.

During his first incarceration, he told the radio station, he was recruited into hardcore crime.

In the documentary by his church’s TV station, he said that he got “born again” during his time in prison, thanks to a man who came to minister to prisoners.

He views the conversion as the turning point to where he is today — a man who calls himself “Chief General Commander” and “Daktari Number One”.

Having seen the light, he started off as a handcart pusher and street preacher in Mombasa. With time, he grew in ministry then moved to Nairobi to establish his church. It is during his time at the Nairobi church that Pastor Ng’ang’a, once a herdsboy in Nyandarua, expanded his flock and also his ego.

One church documentary says his church is rooted on the 13th verse in the 6th chapter of the Biblical book of Mark that says: “They drove out many demons and anointed many sick people with oil and healed them.”

A core part of his sermons is the “exorcising” of demons from believers, who are often talking back through the “possessed” person.

In the process of casting out demons, the pastor is often seen slapping the believer. The “victims” of the demonic possession will typically be held firmly on the ground by the pastor, sometimes aided by ushers.

With that anti-demon promise and the following it earned him, Pastor Ng’ang’a has now become an unapologetic church head who shoots from the hip, caring less about where his words land and what effect they have. The outburst that led to his male flock threatening to take him to court was a threat that he would make their “minuscule” private parts disappear because the men were leaking out information about his church.

It irked the men to the extent that they wrote a letter to Pastor Ng’ang’a through Otieno and Amisi Advocates, protesting the abusive language against them and demanding that he publishes a newspaper apology to all male members of Neno.

The lawyers stated that if Pastor Ng’ang’a could not apologise in two days, “Our further instructions are to commence private criminal prosecution against you … and/or civil proceedings for general damages for defamation”.

The Saturday Nation reached out to the law firm for an update on whether Pastor Ng’ang’a had responded to the demand letter. The advocate said he would get back after consulting with his clients and had not done so by the time of going to press.

One man who has felt the weight of Pastor Ng’ang’a’s words is Robert Wafula, who was until recently one of Neno’s three bishops before he quit to start his own ministry in Mombasa.

Pastor Wafula made the decision to leave after Pastor Ng’ang’a’s viral outburst in which he threw jibes at the bishops in his church, claiming they were disrespectful to his wife.

Pastor Wafula told the Saturday Nation that the message hit him hard, forcing him to sever ties with a man with whom he had been friends for over 20 years.

“Even when correcting or punishing a child, you must explain to him or her why you have taken the disciplinary steps. To date, I don’t know what wrong I ever committed,” he said.

Four months later, Bishop Wafula is at peace after starting Shalom Miracle Church. He leads his flock every Sunday at Tononoka Social Hall.

“I resigned after I saw the video which I believe was directed to me. It was a difficult decision. He has never contacted me and neither have I,” he said.

Pastor Ng’ang’a’s wife, the subject of the preacher’s harangue, has also had an eventful marriage since their wedding in 2012 (the second marriage of Pastor Ng’ang’a, whose first wife died leaving him with four children).

Three years ago, the couple had an ugly exchange at a family court in Nairobi as the wife wanted out. The matter appears to have been settled as Pastor Ng’ang’a said in the radio interview that they have a six-month-old child, the third with her, “and plan to get more”.

To his faithful, Pastor Ng’ang’a is a misunderstood man. One such follower, whom we will call Noah, sat with the Saturday Nation in Nairobi on Thursday.

“These are matters of the spirit. If you are not on the same spirit level as he is, your human body may perceive some things as wrong while they aren’t,” said Noah.

He further posed: “Why have you journalists not reported about the way he healed cancer that was plaguing a man in Ukambani??”

All said about his temperament, Pastor Ng’ang’a says he will not change. He says he acts tough because his ministry is all about fighting evil.

“The problem you guys have is to assume that all people are kind. This work I’m doing, how many have done it and died?” he asked at the radio interview.

Kenyan Man kills his two son after quarrel with wife