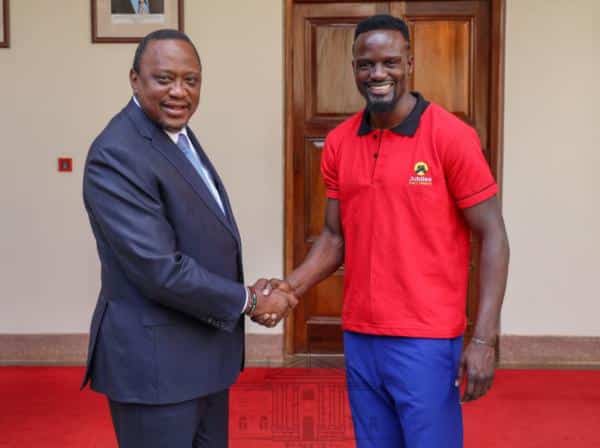 Kenyans react to Uhuru’s endorsement of McDonald Mariga: President Uhuru Kenyatta on Wednesday met McDonald Mariga at State House and assured him of his backing in the forthcoming Kibra by-election.

The Head of State wished Mariga success in his bid and this news was music to the ears of Jubilee Party supporters who were worried about the direction the party was taking.

Online, many lauded the President for supporting Mariga and said that this was the ‘Jubilee they used to know.’

Prior to this, there were various narratives that some factions in Jubilee were fighting to pull down Mariga but it now looks like they are all sailing in the same direction.

Douglas Kiplimo Tanui: Thanks Mr President I have never had any doubts about your good intention for Jubilee, today and in the future..Salute!,your Excellency!.

Sabiri Kabakhana: I sincerely thank our party leader for showing alot of maturity in the party and shame to maina and his team we still believe in uhuruto.

Foreign diplomats are pressuring Uhuru and Ruto for a…

Antho Taruz: My heart is at peace now .,This is the true and real jubilee we knew .,am happy when Uhuru and Ruto are reading from the same script.

Muita W Muita: It pains to see Jubilee we all participated to build dying but at least for now there is hope. May God protect Uhuruto.

Abdifatah Maalim: This is the Jubilee we used to know.

Martoh Muriithi: Jubilee under the leadership of Uhuru and our Deputy party Leader Jubilee iko Imaara

John Githinji: Woow this is the real Jubilee we used to adore and Our party leader has sealed it by endorcing Mariga;All the best Macdonald Mariga

Just a day after IEBC cleared Mariga to vie, an aspirant who was eyeing the Kibra seat on a Jubilee ticket challenged the party’s decision to settle on the former Harambee Stars midfielder as the flag-bearer.

“Mariga proceeds with a campaign that is founded on a nomination process that was illegal and in contravention of my constitutionally protected rights,” said Mr Kinyanjui.

My seven years of tribulations over ICC suspect tag

Why the UK Government Spied on Nairobi Businessman Chris Kirubi

Wiper: Kalonzo Musyoka is not looking for a job in Parliament