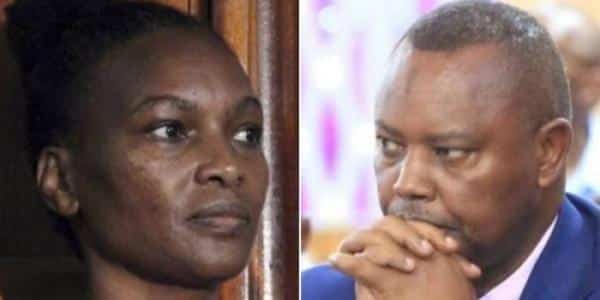 Citizen Digital reported that Wairimiu argued the DCI’s intentions in the investigation were questionable after he reportedly also looked into the property listed on the late Tycoon’s will.

She further added that Kinoti is only supposed to look into the criminal case and not the family’s property.

“I am further apprehensive that the efforts to further detain me is an attempt to keep me away while those who claim to have rights over the said property take ownership unobstructed.

“I believe that Mr. George Kinoti is now determined to hand over the keys to my matrimonial home to the purported beneficiaries of my husband’s alleged will without due process of the law,” read part of the court affidavit.

Sakaja Presented Himself At DCI Headquarters But Turned Away…

Kenyans.co.ke earlier reported that Wairimu and her lawyer, Philip Murgor, boycotted the will’s opening on grounds that it had been tampered with.

Kirundi & Co Advocates, who opened the will on Friday, September 20, in the company of Cohen’s sister, Gabrielle van Straten and her lawyer Cliff Ombeta, however, failed to reveal its contents citing the High Court’s gag on the media.

Wairimu also questioned Straten’s choice to fly out of the country just days before the burial of her brother.

This was after she allegedly put up a spirited fight in which she and Wairimu wanted the rights to bury the Dutch billionaire.

Tob Cohen was laid to rest on Tuesday, September 24 at the Jewish Cemetery along Wangari Maathai Road in Nairobi.