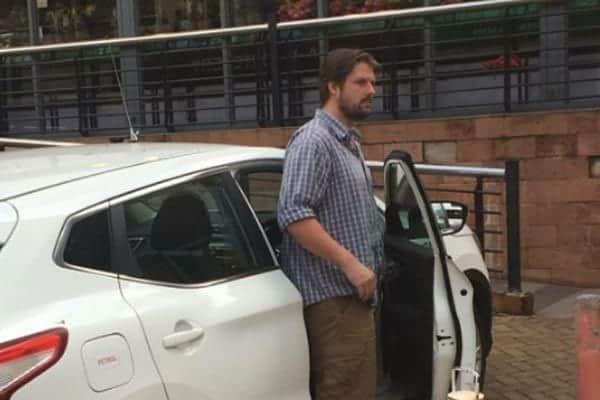 The ‘Racist’ Muzungu expatriate finally kicked out of Kenya: An expatriate who has been accused of insulting guards and racially abusing a woman at the Lavington Mall in Nairobi is leaving Kenya following the termination of his contract.

The International Committee of the Red Cross (ICRC) staff, who is yet to be named, reportedly called the woman who was trying to calm him down a monkey on Sunday.

“A decision to have his assignment terminated was made last evening (Monday) after investigations were concluded,” said ICRC’s communications officer Ms Anne Kilimo.

“He is leaving the country today (Tuesday). We do not entertain what he did. It is not good and should serve as a lesson.”

ICRC said it was also addressing the issues surrounding the contract it had signed with him.

The Nation was told that the man started hurling insults after he was asked to pay Sh50 parking fee.

According to sources within the mall, which is guarded by SecurKenya Group Limited, the expatriate had made a brief visit to the mall and was driving towards the exit where he inserted his card in the slot machine.

“The card was rejected since he had not paid the parking fee,” said a source at the mall who sought anonymity citing sensitivity of the matter.

“He was asked to pay the amount due but blatantly refused saying he had only stayed at the mall for 10 minutes.”

Our sources revealed that the man was then asked to park by the side to give way for other customers leaving the mall but he instead became angry and hurled insults at the parking attendant, guards and customers.

“He caused a commotion and a crowd gathered around him,” said another source who wished not named because he is not authorised to issue press statements.

“Our customers and onlookers started filming him. A few minutes later, he was allowed to leave without paying the fee.”

The video clips and the mall’s CCTV have since been reviewed by the ICRC and Red Cross Kenya teams.

The Nation has learnt that the footage provided by the mall was the evidence relied upon by ICRC to make the final decision to terminate his contract.

The mall’s management declined to comment on the matter that has since been solved internally.

SecurKenya Group Limited condemned the incident but did not report the matter to the police.

“Our guards manning Nairobi’s Lavington Mall were insulted. We do not condone such but we are extremely proud of how professional our guards handled it,” the firm posted on Twitter.

“I applaud the action taken by ICRC in terminating the mission of their delegate. This sad action was that of an individual who went rogue and against the fundamental principles of the Red Cross and Red Crescent. He was not representing his employer,” said Mr Gullet.

He said that the action taken against the rogue staffer was a clear indication that ICRC does not tolerate acts of racism.

In a statement released on Monday, the ICRC said it also met witnesses who narrated what had happened.

“We appreciate those who came forward and reported the incident, especially those who made time to meet with our team,” read the statement signed by Mr Olivier Dubois, Head of Regional Delegation International Committee of the Red Cross.

“The ICRC has a long presence in Kenya, one that has been made possible by our relationships with the public, Kenyan authorities, our partners at the Kenya Red Cross, our dedicated staff, and above all, the communities we are here to serve,” he added.

The investigation on the incident by ICRC began when Dennis Itumbi, the digital communication secretary at the office of the President, called for action to be taken against the expatriate.

“A concerned lady whose only interest was to protect the good name of your organisation tried to calm him down and he dismissed her as a Monkey,” tweeted Mr Itumbi.

“This has been brought to our attention and we shall be seeking remedial action,” Mr Kamau responded in a tweet.

“Kenya has no patience and is no place for bigots and racists cloaked in humanitarian or any other liberal garb,” he added.

ICRC responded by confirming that the man Itumbi had posted about was indeed their employee and that necessary action would be taken after investigations are completed.

“We confirm that this is our staff and vehicle. We do not condone insulting behaviour and racism by our staff. We are investigating the matter and will take the necessary action. Apologies to those involved,” responded the ICRC .

Kenyans on Twitter also called on ICRC to dismiss the official.

“His assignment in Kenya has been terminated, meaning he can be assigned duties in another country…. This sounds weird especially taking note of the fact that you offer aid! How can you allow such a character to be part of your mission?” Kayman George posed.

Others asked ICRC to ensure that the racist man does not work for them again.

@Kadasia99 tweeted: “They just transferred the racist behaviour from Kenya to another location. He still works for them. Nothing resolved.”

This is not the first time an expat is being deported from Kenya for gross misconduct.

In September 2018, the government deported Liu Jiaqi, a Chinese national, after he was caught on camera calling Kenyans monkeys.

Liu was secretly captured on video by a worker he had threatened to sack from his motorcycle shop.

By MARY WAMBUI and By LEONARD ONYANGO