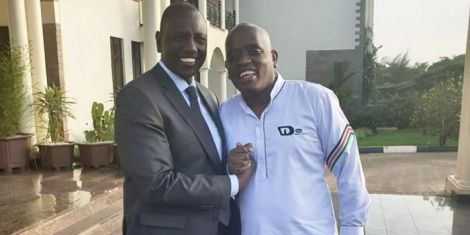 Itumbi, on Sunday, October 20, during an interview with K24’s Anne Kiguta on Punchline, stated that Monica Kioko, a waiter, was his hero and she merited being feted with a presidential award.

The strategist who argued that he worked from State House, and not from the DP’s office, took to Twitter to reiterate how Kioko had touched his heart with her selfless gesture to street children.

“Yes, Monica Kioko is my hero. She works as a waiter and shares her salary with five street kids who she supports.

“She pays rent and feeds them with her little salary as a waiter at Weston. Heroism, in my view, is made up of such great acts,” Itumbi debated.

Itumbi had been on the spot for proposing people that Kenyans online deemed undeserving of presidential commendations.

Blogger Robert Alai who was once charged with treason, Martin Kamotho of the Githeri-man fame who is battling an alcohol addiction and embattled journalist Jacque Maribe who is facing murder charges were all awarded an HSC- Head of State Commendation in 2017. This decision irked Kenyans who felt that the awards had lost meaning.

However, according to Itumbi, one needed not to have performed an extraordinary task to be feted. What mattered most was how an individual’s act touched and transformed lives.

On Thursday, October 17, he had clarified that the awards had sparked a national debate and needed to be scrutinised and studied deeply before being issued.

“I agree that we need to rethink, reimagine and re-do the way awards are done. One way is the involvement of the public in the nominations. We suggested a website in 2015 where such heroes would be identified and we pray that it will be implemented,” Itumbi tweeted.

His remarks on Kioko, a staffer at Weston, however, angered some netizens.

“If you fail to control your mind, your brain will for sure control you. Itumbi thinks a waiter at Weston Hotel who earns more than a deputy principal of a high school deserves HSC award for her humanity. Kweli hii Kenya Kuna maajabu (Wonders shall never cease in Kenya),” one Domnickorwa lashed out.

“Tembea Eastlands and Kibra uone Heroism. (Pay a visit to the Nairobi’s Eastlands area or Kibra slums and you will see the true manifestation of heroism. Women with no jobs  yet they support families Nairobi. Wachana na huyo mrembo wako wa Weston. (There are more deserving people than Kioko),” one user under the alias Liverpool 001 opined.

Others supported his assertions praising Kioko for her kind gesture.

“Who stated that waiters in Weston hotel earn heftily. That lady has a noble heart. Sharing out is God-given,” Kipkirui Taita approved.