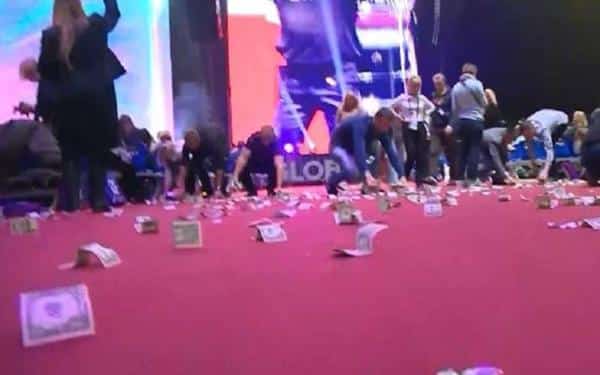 People scrambled to pick up the money, all in $1 notes, as magnate Igor Rybakov told them he wanted to help young Russian entrepreneurs get started and be successful.

Footage shows a countdown on a big screen before the rain shower starts at the Gazprom Arena in St Petersburg.

As the notes fly around in the air, astonished people can be seen looking up before collecting some of the money from the floor.

The businessman then walks onto the stage to address the audience.

Mr Rybakov told the Synergy Global 2019 business forum how he began building his $1.3 billion fortune when his father Vladimir, a Communist-era engineer, gave him just $1.

His dad told him to multiply the money and then share it, the entrepreneur said.

He did so and now is one of the 100-plus Russians to become dollar billionaires during the Vladimir Putin era.

Wearing a hoodie emblazoned with his name in English, Rybakov declared: “My father gave me this ticket.

“I am passing it on to you.

Rybakov, 47, from industrial city Magnitogorsk, is a founder of TECHNONICOL Corporation, a producer of building materials and systems.

A married father of four, he is also known as an author of books on successful business and a philanthropist.