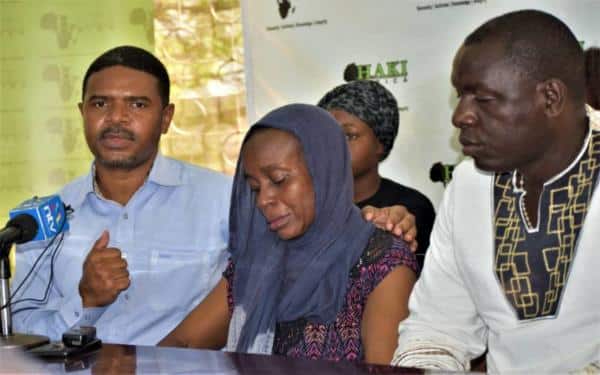 She was happy to secure the job which she thought would change her life and help her raise her children, unaware of the brutality that lay ahead.The contract she had signed with agents in Kenya indicated that she would work in Qatar but she was surprised to find out that she would be flown to Iraq.The change had been made without her knowledge. Recalling the moments of torture in her eight months in Iraq, Lucia could not hold her tears on Tuesday as she narrated her ordeal in the hands of her heartless Arabic employer.

Speaking to reporters at the Haki Africa offices in Mombasa, Lucia said she was battered for eight months in Iraq. A false accusation would be made as a prelude to the beatings.

“I was overworked in Iraq. I could not bear it.” When she told her employers that she could no longer work, she was taken to the agent’s office headed by a lady she identifies as Rahab who beat up and locked her in a small bathroom for three days without food and drink. While locked up, her phone was formatted, deleting all her contacts.

“They delete all contacts to cut [your] communication with anyone close to you,” she explains.Nekesa remembers being moved from the bathroom to a room on the highest floor that absorbed the scorching heat in July which she soaked up for another four days. Later, Nekesa was ordered to clean the whole block.“I started with upstairs rooms, toilets, downstairs and cars. When I finished the agent ridiculed me.”She was then given a choice of returning to Kenya and refund the money her boss had used to facilitate her travel to Iraq on top of the six hundred thousand shillings used to ‘buy’ her from the agency or continue to work.

Nekesa chose the latter.“It was very hard for the boss to let me go because he had paid a lot of money for me. So they always took me back to the agency for exchange but all I got was punishment for not being able to work”. Shockingly, one of the people who tortured her was a Tanzanian she identifies as John who lied to her he was a Kenyan.

When Nekesa asked him why he tortured fellow Africans, the answer was: “Mimi hata niambiwe nikuuwe nitakuuwa. Nitafanya vile nimeambiwa” (If I am asked to kill, I will kill you. I will do whatever I am asked to do.)

With her health worsening, she escaped with the help of an African woman. It happened after the boss left the house one evening.“I went straight to the airport but when I explained my tribulations to the officials, they said they could not help me and called the police.”The officers interrogated Nekesa who provided the contacts of the woman who had helped her escape.

From details given by the woman, the officers contacted Nekesa’s boss who came and talked to the police for about an hour. “My boss told me that she would give me money to go back home the following day but when we got out, I saw the men from the agency waiting outside.”Lucia broke down when she found out that she had been deceived by the people she thought could rescue her.

She was taken back to the agency where she was battered with the boss accusing of stealing her money. “I don’t know where my boss got the money she produced as evidence of my alleged theft.”She was then sold like a slave to another agency.

Nekesa says that agents in Iraq swindled her out of her salary of more than Sh600,00 while she was preparing to fly back to Kenya.

She says there are many Kenyans who are raped and even tried in Gulf kangaroo courts. Two of them, she recalls are languishing in a prison in Iraq.

Nekesa was liberated from the shackles thanks to efforts by the Ministry of Foreign Affairs and Haki Africa, a human rights organisation. Haki Africa managing director Hussein Khalid says he will work with the government to pursue the agents who expedite the travelling of Kenyans to the Gulf and fail to help them in the hour of need. ?