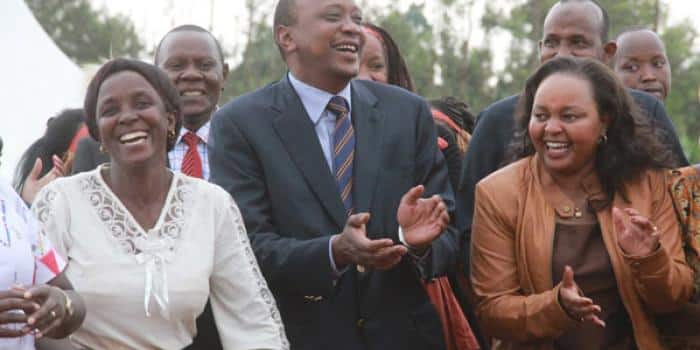 Kirinyaga Governor Anne Waiguru, on Friday, November 29, 2019, could not hide her adoration for President Uhuru Kenyatta and heaped praise on him for aiding her county.

Waiguru was speaking at a fundraiser in Kirinyaga on Friday, November 29 attended by among many, Interior CS Fred Matiang’i, and his PS Karanja Kibicho.

The governor stated that Kenyatta had sourced donations for the county after she lamented over the insufficient allocations by the national government.

“We as a county, contribute to different sectors in the country but the amount of money allocated to us by the government is not sufficient. Like this year, our development budget is less than Ksh800 million.

“With that amount of money, we cannot do as much work as we would like to. I want to thank the president for standing with us. He has supported us and we have received donations. In the bank, we have over Ksh100 million, and that’s a separate account from the one we bank money from the government,” Waiguru lauded.

She disclosed that the county wanted to construct an industrial park, tomato, milk and rice factories.

“We will employ over 1,000 workers out of the president’s support. We want to start a new project to help farmers as we have a value chain of avocado and chicken,” Waiguru stated.

She further asked the chief guest, CS Matiang’i, to intervene on behalf of Kirinyaga and have the government purchase over 1,000 eggs from the county.

Waiguru also requested the CS to coordinate the Presidential National Task Force on Coffee Sub-sector to negotiate with local farmers again, after the first round of talks was marred by politics.

During the fundraiser, Matiang’i warned politicians against disrespecting public servants while defending PS Kibicho who was accused of frustrating legislators.