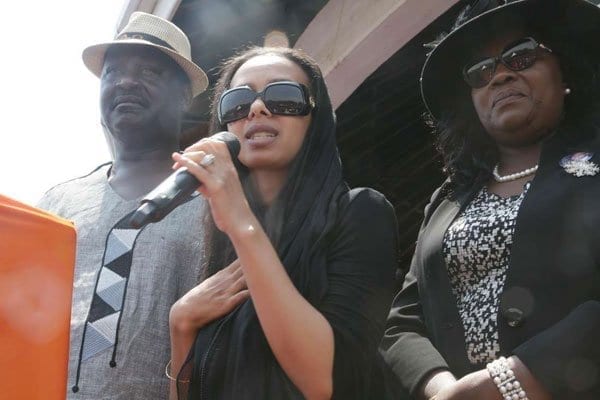 Ida Odinga, Lwam go for out-of-court deal in Fidel property row: A judge has given Ida Odinga and her daughter in-law Lwam Bekele until November 27 to settle a succession dispute out of court.

Appearing before Justice Aggrey Muchelule on Wednesday, parties said they had been holding discussions with the intention of settling the matter.

The family is embroiled in a dispute after the Odingas accused Ms Lwam, widow of their son Fidel, of sidelining the twins he sired with another woman, Phoebe Akinyi Gweno.

Ida and her daughter Winnie hold that Lwam is aware of the existence of the children but she has chosen to sideline them.

Justice Muchelule in October ordered a DNA test to establish the children’s paternity but they are yet to be conducted.

In court on Wednesday, Justice Muchelule also added Ms Gweno to the case as an interested party.

In her petition to join the case, Ms Gweno said she wanted to state her position to clear the air and protect her children’s interests.

Ms Ogweno noted that the tussle pits Mrs Odinga and her daughter Winnie on one side and Ms Bekele on the other, thereby leaving her and her children in between.

“Owing to that, she seeks leave of the court to be enjoined as an interested party to clear the air and give her position on the same,” her lawyer John Swaka said in the application.

Mrs Odinga moved to court saying she wanted to protect the interests of other beneficiaries of the estate of her late son and her other children.

She said her daughter in-law secretly filed the application for control over Fidel’s assets and failed to furnish them with the papers despite having an interest in the estate.

The case will be mentioned on November 27.