The Nation met and interviewed him in prison, where he is being held after failing to raise Sh200,000 bail for an unrelated case.

Dressed in a slim-fit blue shirt, in handcuffs — and spotting a red T-shirt inside — the 25-year-old said the photos used by Sky News as those of a Paul Manyasi, the alleged stowaway, were his.

“I am alive, as you can see,” he said, flanked by his father Isaac Beti, 45, and Nairobi lawyer James Mbugua.

Shivonje was delighted to see his father, who had travelled from Butali, Kakamega County.

Kenyan Family disown man who fell from London skies as their…

Kenyan Man who fell from KQ plane into a London garden…

Body of stowaway fell off a Kenya Airways plane near…

His father — who identifies himself as Isaac Betti and not Isaac Manyasi as identified by the Sky News report — had come to Nairobi to visit his son for the first time in two years — and we accompanied him to the prison.

He had come with Shivonje’s uncle, Mr Timothy Burundi, who has been visiting him regularly at Industrial Area Prison Remand, where he was previously held.

Mr Shivonje’s emergence now compounds the identification dilemma of the nationality of the man who nestled in the landing compartment of the aircraft on June 30 and fell 3,500 feet as the plane approached Heathrow Airport in London.

The plane’s flight records show that it had been to South Africa before taking off from Jomo Kenyatta International Airport for London on the early morning of June 30.

So far, no family has claimed the body of the stowaway who fell in a London compound.

It is still in the United Kingdom.

Mr Shivonje told the Nation that he was arrested on August 7 and remanded on August 13 after being taken to a Kibera court where he is facing defilement charges.

On June 30, the day a man fell from the compartment, Mr Shivonje says he was in Kawangware, where he used to work as a teacher of English and science at a private school.

In an article published on November 11, Sky News identified Paul Manyasi, reported as an employee of Colnet — a cleaning company based at the airport — as “the man who fell from the sky”.

The next day, the Kenya Airports Authority (KAA) issued a statement saying the name Paul Manyasi “does not appear in the JKIA staff register … and in the airport’s pass biometric register”. Colnet also denied it had employed a Paul Manyasi.

Sky News reported that it had received the photos it published from Paul’s girlfriend, also reported to be an employee of Colnet, whose identity was not revealed.

Shivonje said: “Those are my photos and they were taken from my Facebook page.”

When the woman is shown the police e-fit image of the deceased in the Sky News video, she says: “They look alike, but he wasn’t dark. But the face resembles.” 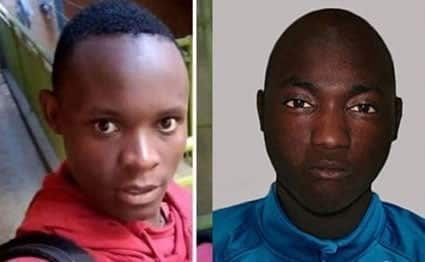 Sky News reported that Paul Manyasi was a 29-year-old.

The man told the Nation that he had been living in Kawangware, while Paul Manyasi was reported to have been a resident of Mukuru kwa Njenga.

During our meeting, we asked Mr Shivonje’s father about some of the statements he made to the Sky News team.

For example, in the video, he is shown the bag that was found in the KQ compartment and says: “He used to have this one”.

Did he lie to the Sky News reporter? we asked.

“I could not tell them that my son was in jail,” he responded.

“When the visitors came, they said they wanted to speak to me. They said my son was working at the airport. They asked me if I knew where he was working and I said ‘No’. They told me that my son died after hiding in a UK-bound flight.”

“When they showed me the photos, I told them that my son’s name is Cedric Shivonje Isaac… All this time, I knew my son was in remand but I could not reveal to them. I wanted to protect him,” he said.

“I did not want the villagers to know that my son was in jail.”

He added that the Sky News reporter gave him Sh20,000 before he left the home.

When the Sky News story broke locally, Mr Shivonje says he was reading a novel when he was alerted that he had been in the news.

“I saw my pictures on Citizen TV but the name was not mine. They said I was a cleaner at Jomo Kenyatta Airport. The next day, a madam (prison warden) told me the full story and inmates started calling me kifo (death) and maiti (corpse). I cried a lot.”

“They have damaged my son’s reputation and he needs to be cleansed after being labelled dead,” his father said.

Detectives who are handling the case in Nairobi told the Nation that the prints recovered from the stowaway do not match anyone in the civil registry.

The new development deepens the intrigues surrounding the man who stowed away a Kenya Airways flight and fell into a London compound.

Meanwhile, Nairobi law firm MJM Law LLP has threatened to sue Sky News, which it accuses of defaming its client.

In a November 19 letter, the company is demanding full retraction of the article, an apology and written commitment not to publish any more articles on Mr Shivonje.

Beth Mugo Flies Out to Seek Medical Care in the U.S.

PHOTOS: Now Uhuru’s Sister Visits Raila In His Office-Why all these visitors?