VIDEO: Chaos as Boni Khalwale is roughed up in Kibra. 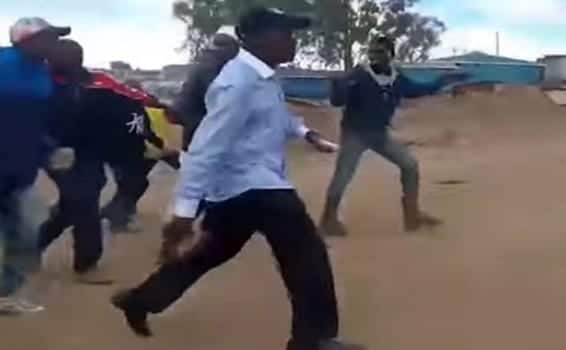 You are not welcome here.

That was the message former Kakamega Senator Boni Khalwale received this morning when he visited Kibra’s Laini Saba area.The former legislator was roughed up by rowdy youth as he was on his way to YMCA Polling Station where he was reportedly going to supervise the by-election.In a video that has been doing rounds on social media, Khalwale is seen walking away from the irate crowd.

In a section of the video, a stone is hurled at the group walking away from the scene amid chants of “Toka! (Leave!)”

Khalwale who is an ardent supporter of Jubilee candidate McDonald Mariga is later seen running for his safety as the crowd charged behind him.

Hours after the scuffle, Khalwale spoke to journalists claiming that the election process was going on smoothly and that ODM had become scared thus making bribery claims.“We have mobilized very well and that is why ODM is running scared and making claims of voter bribery,” said Khalwale.“Mashimoni has been peaceful.

Our opponents have run scared after seeing our people have turned out in large numbers. Our focus is to give our people the confidence to vote,” he added.]

Earlier on there was drama at Mashimoni polling station after two people were allegedly caught bribing voters during the ongoing Kibra mini-poll.In the altercation broadcasted live on Citizen TV, one of the suspects later identified as David Jemmo Korir an employee of Lang’ata CDF office is seen being roughed up by irate voters who wouldn’t hear nothing from law enforcers.

The two suspects were later whisked into awaiting police vehicles amid jeers from the irate voters.The voters claimed the suspects were dishing out Sh200 bribes to each voter.