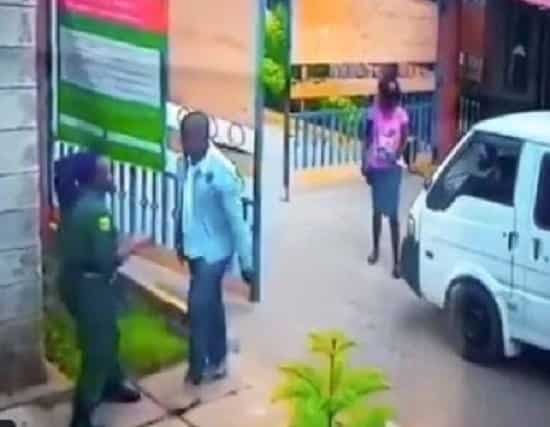 Barely a week since the Directorate of Criminal Investigations (DCI) issued a warning against gender-based violence, another disturbing assault video surfaced on social media.

In the video, an angry man is seen physically assaulting a female security guard in what seemed like an argument that turned sour.

The social media post indicated that the man in question goes by the name Justin and the incident took place on Monday, November 25, 2019, at 1620hrs.

The video elicited mixed reactions from Kenyans who expressed their disgust towards the incident.

Evans Maina – They don’t even dare think of what next, bet saa hii anawish his act was different. poor thinking.

Lawi Makori – I don’t understand how it gets to such a point of assaulting a guard like that.

Peshie – My goodness, and there are people around not doing anything to help her.

Jano Kaks – What’s wrong with this WOMEN beating fellow women? @DCI_Kenya the ball is on your side.

On Friday, November 22, 2019, a video made rounds on social media showing a supervisor assaulting a female cashier.

The man was, however, arrested after public outcry.

Here is the video courtesy;

Word of the Day:God’s Timing.