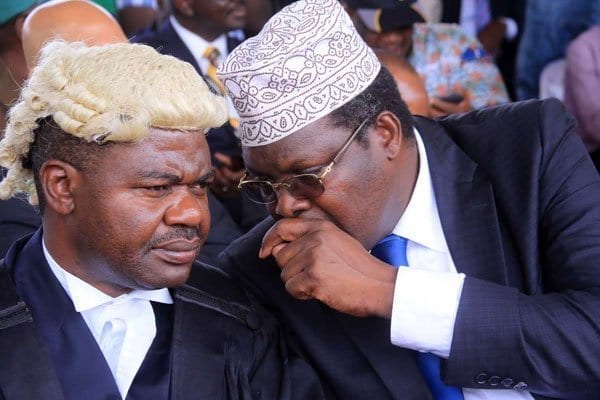 ANC leader Musalia Mudavadi now claims that Raila Odinga became a political lone ranger, shortly after the 2017 General Election, and unilaterally made decisions without consulting the other principals within Nasa.

In his just-published memoirs, Mr Mudavadi says they were all shocked when Mr Odinga — out of the blue — formed the National Resistance Movement (NRM), which was taken over by controversial lawyer Miguna Miguna to prepare for Mr Odinga’s swearing-in as people’s president.

Mr Mudavadi, then a key ally of Mr Odinga, says Mr Miguna’s entry into Nasa activities was mysterious and disruptive of the smooth running of the post-2017 General Election affairs of the coalition.

“I must emphasise, NRM was not a creation of Nasa, nor was it a Nasa organ. It was just as mysterious to me as was the manner in which it was first introduced to Kenyans. So, too, was the sudden emergence of Miguna Miguna ‘the NRM General’,” Mr Mudavadi writes.

In Soaring Above the Storms of Passion, Mr Mudavadi traces the controversial lawyer’s return to ODM leader Raila Odinga’s fold to a rally on October 25, 2017, a day before the repeat presidential election.

It all started on October 10 when Mr Odinga pulled out of the second presidential race after the first one was nullified by the Supreme Court and announced that he had an earth-shaking message which he would unveil on October 25.

“I did not know what this earth-shaking message was. I established that none of the other three principals knew (it). And so like the rest of the country, we waited for October 25, 2017,” Mr Mudavadi writes.

He says he nonetheless rallied behind the decision of their candidate even though not all principals were in support of pulling out of the election.

Apparently, the withdrawal had been hinged on the electoral commission’s statement earlier that only Mr Kenyatta and Mr Odinga would be eligible to take part in the repeat poll and Nasa believed that if they pulled out, the election would not take place.

But a day after Mr Odinga withdrew from the race, the High Court ruled that the repeat ballot must have all the names of the people who had participated in the annulled poll.

“It would be dishonest to say that this situation did not throw us off balance. We may have put on brave faces in public but internally we knew things were not good at all,” he writes.

The withdrawal was to become a bone of contention within the coalition in the intervening days.

Some of the Nasa lawyers who pushed for participation in the October 26 poll argued that after the Supreme Court win, the momentum had been built and that rigging would not have been possible.

“October 25, 2017, a day before the repeat poll, our supporters began turning up very early in the morning for our much-anticipated rally at Uhuru Park. Kenya held its breath, waiting for us to unveil our next course of action,” writes Mr Mudavadi.

Unbeknown to the country, however, Nasa had no earth-shaking message, according to the accounts in Soaring Above the Storms of Passion, published by The Mudavadi Memorial Foundation Trust Fund, in association with Midas Touch Media Limited.

It was only hours before the rally at Uhuru Park, however, at a meeting in Mr Mudavadi’s offices in Riverside, Nairobi, that he and the other principals realised that there was no big message to take to their supporters, the book claims.

“We had remained patient all the time when he (Odinga) told us to wait for the right time to know the message … Amid mouthfuls of tea and peanuts, he announced that he would tell Kenyans that we would not recognise Uhuru after the repeat election to be conducted the next day,” Mr Mudavadi writes.

He says at this point Bungoma Senator Moses Wetang’ula interjected: “But Tinga, that is what we have been saying all along. What is new about that? That cannot be the big announcement that we have been promising the world.”

From the talk of secession and storming of State House that some of Nasa supporters had been pushing for, the ”big announcement” was becoming a big disappointment, Mudavadi writes.

“Eventually, a member of our ANC party came up with the thought of non-violent resistance against the government and all institutions and individuals who were aborting democracy in the country. The idea was quickly picked up and, before long, there was a message of sorts to take to Uhuru Park.”

It was at this point that they left for Raila’s office in Upper Hill where the new message would be incorporated into Mr Odinga’s talking points. “The assignment was left to David Ndii, Dennis Onyango and (James) Orengo. They were presently done with the task and we left for Uhuru Park, next door, in a speedy motorcade.”

He writes that even though there were “stirrings of excitement in the crowd”, it was not like anything they had become used to during the campaigns.

Mr Mudavadi writes that Mr Odinga read through the prepared speech “with a sense of conviction and purpose.” He painted a picture of many false dawns that had been frustrated, and outlined what he called the fresh and final phase of struggle and urged Kenyans not to relent “until the oppressors were removed.”

He urged Kenyans of goodwill to boycott the repeat elections — scheduled for the next day — and told the youth to keep away from harm’s way. He also asked Kenyans to boycott goods and services from businesses deemed to be benefiting from the dictatorship that was being entrenched.”

“At this point, Raila introduced a new dimension. Nasa, he declared, had now transformed into the National Resistance Movement (NRM).”

Mudavadi says this development took the other principals by surprise as it had not been discussed, let alone agreed on.

“He would explain to us later that seeing the crowd was not sufficiently enthused by what he was reading, it had suddenly occurred to him that he should make this proclamation,” Mr Mudavadi writes.

The former Vice-President says that from this point NRM, more or less, took charge of the affairs of Nasa in the run-up to the controversial swearing-in of Mr Odinga on January 30, 2018.

“Soon enough NRM would begin taking a life of its own away from the formal Nasa Management Team and constituent parties and their organs.”

He says that in public he, Mr Musyoka and Mr Wetang’ula lent support to the proclamations but, away from the public limelight, made spirited attempts to have Mr Odinga speak with them in the same voice.

“Not all the cards were being placed on the table. Our ODM colleagues seemed to know something that the rest of us did not know. This state of affairs would culminate in the so-called swearing-in affair.”

Some of the companies that were named in the economic boycott included Safaricom Ltd which had been hired by IEBC to transmit election results from the Kenya Integrated Electoral Management Systems (KIEMS) kits at the polling stations to the IEBC servers in the 2017 election and Brookside Dairies, which is owned by President Kenyatta’s family.

Mr Mudavadi recaps Mr Miguna’s bitter fallout with Mr Odinga in 2011 and how he had gone on to “say very appalling things in the media and in a book which he published in 2013.” Mr Miguna ran for the Nairobi governor position in August 8 election and lost.

“How he suddenly metamorphosed into a member of our team and to the non-existent position of NRM General remains a mystery.”

But yesterday, Mr Miguna said he was never in Nasa, and that he founded NRM in October 2017 long after the elections.

“I was not in the Nasa campaigns. I was an independent candidate and campaigned on my own. I founded NRMKe in October 2017 long after their a** had been kicked,” the Canada-based lawyer said in a tweet.

Mr Mudavadi contends that to introduce a new instrument midway in the life of a political party or outfit would have required it to be registered with the Registrar of Political Parties or at least for the existing party organs to recognise and endorse it.

Some within Nasa, however, felt that NRM was just the perfect weapon needed to rally their supporters behind the civil disobedience and pile pressure on the government.

It is this group that Mr Mudavadi blames for proposing certain extremities and announcing them without adequate consultation and consensus.

“These included the proposition to swear in Raila as the People’s President. We did not know — certainly I didn’t know — who was going to swear him in until when, after a number of hiccups, the name of the self-proclaimed NRM General Miguna cropped up again.”

Mr Mudavadi writes of the protracted debate within Nasa on what would follow the swearing-in. At a meeting held at Maanzoni on November 25, Mr Mudavadi writes, speakers broached the idea of secession, but Mr Odinga reportedly said it would be useless to take up the Bible, utter a few words that sounded like being sworn in and “after that drive back to his regular residence in Karen.”

“When I take the oath, I must become the president,” Mr Mudavadi reports Mr Odinga as saying. He went on: “I don’t want to become a comic like Kizza Besigye of Uganda. I want to be like Emmerson Mnangagwa of Zimbabwe.”

Kenyan woman sentenced to death for drug trafficking in Malaysia

Proud to be Kenyan-British, a project working with young people in UK

Help to find Family of woman who died in Dallas Texas