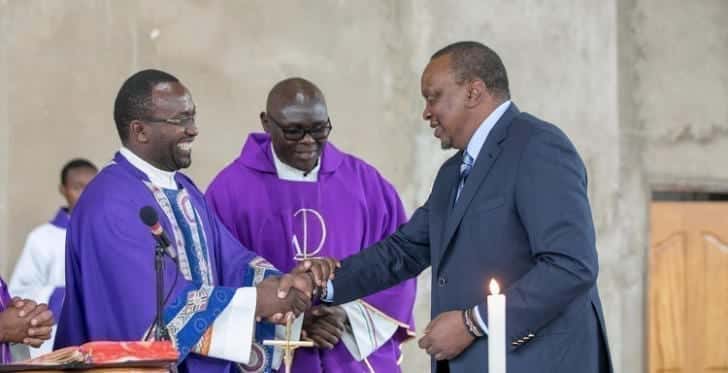 President Uhuru Kenyatta is increasingly becoming an isolated man in his backyard as at least 12 MPs yesterday skipped  his function in Kiambu county.

In what appears to be open rebellion against  Uhuru who last week lashed out at them for too much politicking, only three out of the 15 MPs from the county turned up for his harambee.

Kikuyu MP Kimani Ichung’wa said although he left the country on Sunday, he had not received any invite from the organisers or the Office of the President.

“His office never invited me but maybe they sent them to those within the country,” the close ally of the Deputy President William Ruto told the Star.

“I would have been happy to join our President in the work of building the Lord’s house,” he added.

Mwaura said it would be wrong to say leaders from Mt Kenya region avoided the President in the harambee where Uhuru donated Sh3 million in cash and pledged another Sh4 million.

“To says that the President did not have MPs at the event would be untrue. He came in a very quiet manner. There was no fanfare, no mobilisation. He just came to worship and to contribute to the harambee,” Mwaura said.

He said the President did not stay long at the church since he was busy with the 110th African, Caribbean and Pacific (ACP) Council of Ministers meeting being hosted by Nairobi.

“No leaders spoke before him. The President said he was going to be with guests who were in Nairobi for the ACP meeting, so he left early after giving his contribution,” he said.

Gatundu South Moses Kuria was conspicuously missing at the church event as he had accompanied the DP  for a series of church meetings in Makueni, Embu and Nyeri counties.

In Kiambu, the President has told graft suspects to carry their own cross saying that no one will be spared by the law if found culpable.

He urged Kenyans to join hands in fighting corruption which he said is the greatest impediment to the country’s growth.

“Please, let us not politicize the war on corruption. When an individual is stealing public resources he doesn’t do so on behalf of his family or community. Therefore, anyone who is implicated should carry their own cross,” the President said.

He said as a country which adheres to the rule of law, all institutions mandated to lead the war on graft will not be interfered with and that everyone will be presumed innocent until proven guilty in a court of law.

“As a nation which observes the rule of law, we should allow our institutions mandated to deal with corruption to do their work independently and ensure all suspects are treated equally,” said the President.

His statement came two days after Nairobi Governor Mike Sonko was dramatically arrested by sleuths in Voi after the Director of Public Prosecutions Noordin Haji ordered his arrest.

On Sunday, the President who attended a Church Service and a fundraiser at St Francis of Assisi Catholic Church in Ruiru town, said that there was no sacred cow in the fight against and that the law will be followed to the later to stem graft in the country.

“Whether you are called Uhuru, Kamau, Patel or Odhiambo, you were not with your family, tribe or church. You stole alone and therefore carry your own cross,” Uhuru said.

The President also called on politician to stop politicizing the war against corruption saying that doing so will be detrimental to its success.

He noted that the country upholds the rule of law and therefore all those implicated will be subjected to a thorough legal process to determine if they are culpable or not.

“We observe the rule of law and our law dictates that everyone is innocent until proven guilty. Therefore everyone will have a right and space to prove his innocence,” Uhuru said.

He however said that he will not be swayed by political tantrums in the country in his pursuit to slay the corruption dragon urging Kenyans to join forces and fight corruption collectively. “This is not an individual’s fight. It’s a fight that should be fought by the 47 million Kenyans so that we can end graft once and for all,” Uhuru said.

His words were directed to graft suspects in the country especially the big fish including Sonko and his Kiambu Counterpart Ferdinand Waititu. Waititu who was present on Sunday tried in vain to reach out to the President.

Haji recently announced that he has already lined up 68 witnesses to testify in the Sh 580 million graft cases against Waititu who is charged alongside his wife Susan Wangari and eight others for bending procurement laws to steal from public coffers.

A Guide to Understanding Depression and Trauma, and Healthy Coping Behavior

‘I am in the race to the end’ says Mudavadi