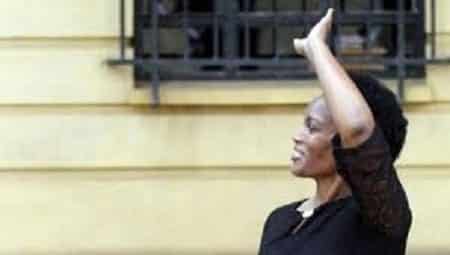 Sarah Wairimu, who is facing murder charges of her husband Tob Cohen has been allowed into their Kitisuru matrimonial home in Nairobi to collect her personal effects under strict supervision of police.

This follows High Court’s ruling on January 16 that allowed Sarah to pick up only necessary items from the crime scene that would enable her to live comfortably pending the hearing and determination of Cohen’s murder case.

“Ms Wairimu is allowed to collect her clothes, shoes, handbags and grooming tools from the premises,” directed Justice Mutuku.The widow is the main suspect in her husband’s death. She is facing murder charges alongside Peter Karanja.Cohen’s family lawyers Dunstan Omari and Cliff Ombeta were also present at the mansion-turned-crime-scene to ascertain that the items picked were strictly Wairimu’s personal belongings.

“Only personal effects like clothes, shoes, perfume, makeup, handbags, and things of a sort,” said Dunstan Omari.Lawyer Cliff Ombeta reaffirmed that Wairumu would pick only specific things and nothing else.“Not even a knife, spoon, salt or wine. That is why we are insisting a video must be recorded. They (officers) must record everything that goes on, step by step,” he said.

According to Ombeta, two female officers will accompany Wairimu everywhere she goes and make sure everything remains intact.The process was supposed to begin at around 11am but was delayed because of disagreement between Cohen’s family lawyers and Wairumu’s on whether the victim’s lawyers were supposed to take part.

Three Spacious and Meticulously finished Houses for sale by…

Omari told reporters they were barred from taking part in the process on the grounds that the court order only allowed Wairimu and her lawyer Philip Murgor into the house.The lawyer, however, reached an agreement with officers from the Directorate of Criminal Investigations who will record a video of the process and they will be provided with a copy.

Wairimu was directed by the court to list the items she takes on a form bearing her signature.  “We will watch the video and keep the list to make sure the process does not interfere with the investigations. There will be no documents, papers or any other things except her personal effects,” said Omari.

Wairumu had presented a list of items she wanted to take from their home turned crime scene including her foodstuff and alcohol. She also wanted the Directorate of Criminal Investigations to give back her two Rottweilers called Major and Snow.

The widow also wanted her car with registration number KBW 171G released and collect all of utensils and electronics belonging to her.  Other effects include personal documents, golfing equipment, furniture, music albums and novels.On October 30, 2019, Ms Cohen through lawyer Murgor applied to the court to grant her access to her home to pick up the belongings.

She was arrested on August 29.Cohen’s body would later be found in a septic tank at his home in Nairobi. It was wrapped in layers of clothing which police said indicated the gruesome torture he underwent before his death.Ms Cohen denied killing her husband, a former CEO of Philips Electronics East Africa and was released on Sh2 million bail but under strict bail terms. ?

Kenya will only hand over citizens to ICC legally