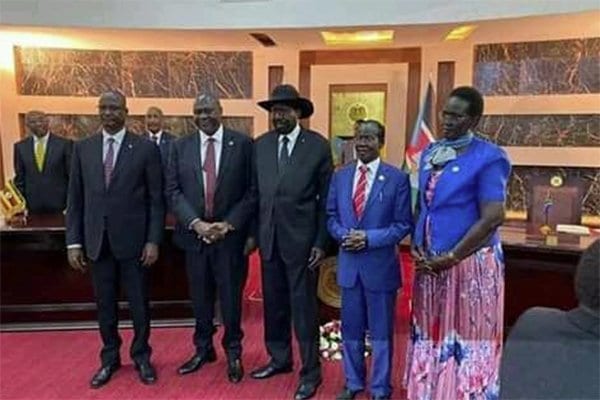 Dr Machar and three other vice presidents of South Sudan were sworn in, on the deadline to form the new unity government.

The country had until Saturday February 22 to form the Revitalized Transitional Government of National Unity (R-TGoNU).

President Salva Kiir did not announce the fifth VP. The chair remains vacant as the South Sudan Opposition Alliance (SSOA) have not settled on a candidate for the position.

In a letter to the President dated February 20, 2020, seen by Nation, SSOA nominated four members of the alliance from their various political parties — Gabriel Changson, Denay Jock, Josephine Lagu and Joseph Bakasoro. The Alliance asked President Kiir to choose the best candidate, among the four, for the VP post.

The Alliance said it would abide by Mr Kiir’s decision. However, the president did not announce a candidate for the position.

President is also expected to announce the new leaders in the 614-member R-TGoNU.

Earlier in the day, reports indicated that some parties to the peace agreement had not nominated members to the 550-member transitional legislative assembly, despite the deadline to do so.

The country was supposed to have a fully constituted government by the end of the deadline.