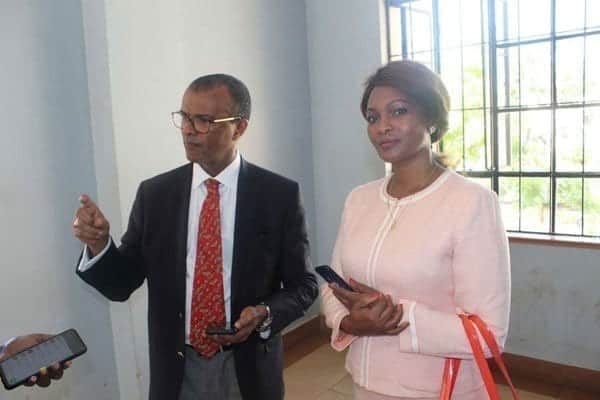 The fight for control of murdered Dutch tycoon Tob Cohen’s property has taken a new twist, with widow Sarah Wairimu accusing three of his relatives of forging his will so as to disinherit her.

Ms Wairimu filed an application at the Milimani High Court on Monday, seeking orders for the Director of Public Prosecution (DPP) and Directorate of Criminal Investigations (DCI) to prosecute Cohen’s three relatives for alleged fraud and forgery.

The relatives are Gabrielle Hannah Van Straten, Sharon Cohen and Seth Van Straten, who want to be listed as interested parties in the succession matter.

Through lawyer Samora Owino, Ms Wairimu notes that the three indicated that they had an identifiable stake by virtue of a will dated April 30, 2019.

She says, however, that she has independently confirmed that the two-page will is a forgery and was obtained through fraud.

The complainant said an expert document examiner reported this finding in a report dated February 1.

Cohen was murdered between July 20 and September 13, 2019 and his body found in a septic tank at his Nairobi home.

The widow wants the court to find that his sister, Gabrielle, committed perjury by claiming in her supporting affidavit that she learned of the existence of the will “soon after the death”.

She wants to be allowed to cross-examine Gabrielle on the contents of the affidavit dated January 27, 2020 regarding authenticity of the will.

Ms Wairimu, in court documents in which she describes herself as Cohen’s only widow, notes Gabrielle is listed as the principal beneficiary.

On December 5, 2019, Ms Wairimu obtained a special limited grant of letters of administration for purposes of filing for preservation of the estate and obtaining a death certificate.

The complainant further says the advocate representing the three interested parties, Danstan Omari of Musyoki Mogaka & Company Advocates, should be disqualified from the case.

“He is a material witness in the High Court criminal case and in this succession case for the reason that he was the advocate of the deceased and participated in a vicious media campaign against the applicant following institution of divorce proceedings by the deceased,” lawyer Owino indicated.

He added that a false narrative was propagated that Ms Wairimu was harassing and denying the deceased his conjugal rights over an alleged dispute over ownership of their property, which forms part of the estate.

In the application filed under certificate of urgency, the lawyer described Mr Omari and lawyer Shadrack Wambui, also of Musyoki Mogaka & Company Advocates, as conflicted.

He said Mr Wambui caused Ms Wairimu’s arrest after lodging a complaint in which she was accused of assaulting Cohen.

Ms Wairimu is also seeking to stop the DPP and DCI from withholding her house, and account for everything they interfered with since her arrest and prosecution in connection to Cohen’s death.

On September 19, 2019, Ms Wairimu’s lawyer Phillip Murgor was invited by lawyer Chege Kirundi to attend the opening of the will on September 20, 2019.

Mr Murgor declined the invitation, alleging that the document’s confidentiality had been severely compromised.

“Further the timing of the intended will opening ceremony was ill-conceived given the deceased was yet to be buried and the applicant was still incarcerated at Lang’ata Women’s Prison,” Mr Owino said.

“The decision by Gabrielle and lawyer Kirundi to open the purported will is questionable.”

The lawyer further said there was evidence that intended malice unconstitutionally deprived Ms Wairimu of her rights to her matrimonial property and inheritance.

Ms Wairimu learnt through the media that the will bequeathed their jointly owned matrimonial home to Gabrielle and her children.

She also learned that shares in Cohen’s companies would likewise be bequeathed to Gabrielle together with an alleged Sh100 million in local and international banks.

In the disputed will, Cohen’s brother Bernard was given Sh50 million said to be in a Dutch bank.

Kiambu politician Patrick Muriruri also attended the ceremony to open the will and it was said that two unnamed politicians he owed them Sh35 million. Ms Wairimu said she did not know this.

Through lawyer Murgor, she requested a copy of the will from Mr Kirundi but did not receive it.

Ms Wairimu further says the ODPP and DCI illegally seized her matrimonial home, registred as LR No.2591/499, at Farasi Lane Mugumoini Close in Lower Kabete in the guise of investigating a crime scene.

“All samples that the ODPP and DCI require have been taken and countless photographs and video recording made to ensure competent production of relevant evidence, if any, at the criminal trial, hence there is no need for further retention of the matrimonial home by the ODPP and DCI,” she told Justice Wilfrida Okwany.

But the ODPP sought to be allowed to leave the succession case, saying its functions do not involve handling such matters.

In a preliminary objection to be listed as respondent in the suit, the ODPP said the property that Ms Wairimu refers to as her matrimonial home is an active crime scene and that it did not place a caveat on it.

The court will rule on the ODPP’s preliminary objection on February 27 while Ms Wairimu’s application to have Cohen’s relatives prosecuted over forgery will be heard on April 2.