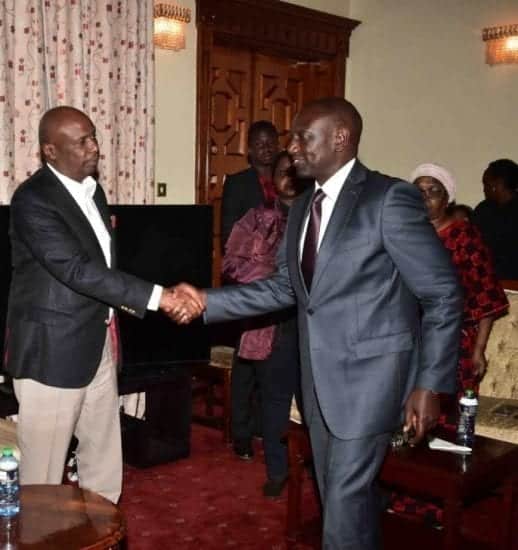 The family of the late retired President Daniel Moi has welcomed Deputy President William Ruto to mourn with them at their home.

Raymond Moi on Tuesday said there should be no issue with Ruto going to the family home as perceived.

“Thank you for coming to pay your tribute. (Interior CS Fred) Matiang’i was here, registered his condolences and pledged the support of the state. And we would like to profoundly say we are grateful,” he said.

Raymond added, “You worked with Mzee, and it is only in order for you to register your condolences.”

There has been bad blood between Ruto and Moi’s son, Baringo Senator Gideon, with political analysts putting it down to a battle to control the Rift Valley region.

Last year, Ruto’s attempts to visit Moi at his Kabarak home were thwarted  after he was denied access.

Ruto flew to retired President Daniel Moi’s home in Kabarak but failed to meet him after waiting for three hours. 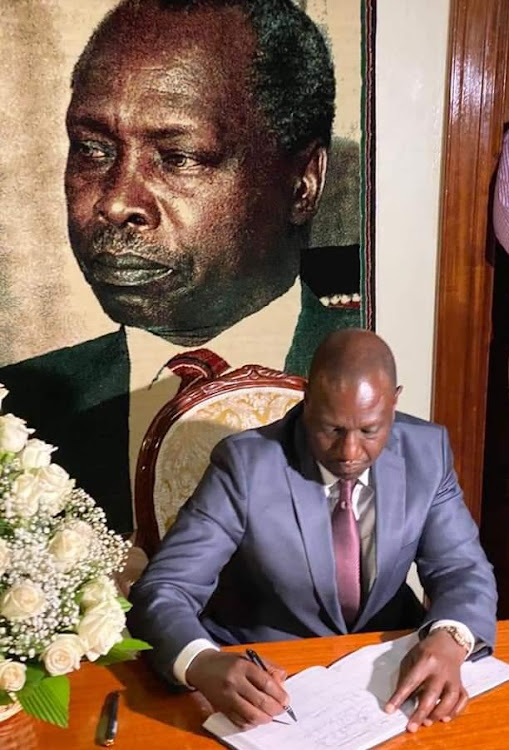 Moi’s spokesman Lee Njiru confirmed that Ruto visited but did not see Moi because then 94-year-old was with his doctors.

Ruto was greeted by the caretaker, security detail and two pastors.

“Former President Mzee Daniel arap Moi was visited by Ruto at his Kabarak home,” a statement from the former President’s office said.

“Unfortunately, this coincided with the time of Mzee Moi’s routine physical exercise with his doctors. Mzee Moi agreed to meet the visitors at a convenient time another day in the very near future,” the statement said.

This seemed to escalate the rift between Ruto and the Mois.

Sakaja spoke in response to the “humiliation” that Ruto suffered when he was “denied access” to Moi.

Sakaja said it was unnecessary for Moi’s son to push his rivalry with the DP to the extent of embarrassing him.

(We were very hurt by the embarrassment Ruto suffered). Gideon [should know] that the stone he has despised and rejected will be uplifted by God and be the cornerstone.”

Both Ruto and Gideon were among hundreds of mourners who turned up at the burial of the late Baringo South MP Grace Kipchoim at Kimoriot in Mochongoi.

Senator Moi received a tongue lashing as the leaders assured Ruto of their support in his 2022 presidential bid.

“You are fake because you allowed an outsider Raila Odinga who opposed Jubilee during the previous election to greet your father yet you turned to lock outside your own brother,” Kapseret MP Oscar Sudi said.

Ruto who arrived at 11 am shook hands with Gideon before taking his seat in a rare show of goodwill.

On Tuesday, Ruto while meeting the family at their Kabarnet Gardens home in Nairobi reiterated that Mzee Moi had mentored him and gave him a chance to lead.

“He is a hero to many because we are here today because of him,” Ruto said.

The DP said President Uhuru Kenyatta had directed that he leads the Cabinet in meeting with the family tomorrow (Wednesday) but on further consultation, they agreed that they visit on Friday when Uhuru arrives from US.

“There will be further consultations between the steering committee, head of public service and the Cabinet on the rest of the plans. And we can assure that Mzee will be accorded all the rites that deserve a man who made major contributions to the country,” he said.