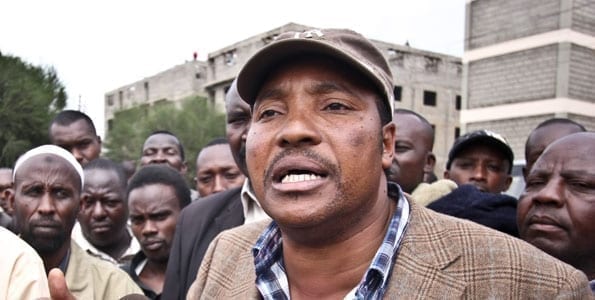 Former Kiambu Governor Ferdinand Waititu was on Friday, March 11, shouted down by a section of Kiambu delegates at Gideon Moi’s home in Kabarak, where he was attending a Kanu delegates meeting.

According to K24 Digital, Waititu’s quest to speak was almost stopped but delegates from other parts of Mt.Kenya demanded to have him address them.

A section of the over 1,000 leaders who had attended a meeting convened by Senator Moi started chanting,“Baba yao! Baba yao!”

Speaking to the delegates, Waititu, who was previously an ally of Deputy President William Ruto, claimed that he was still the chairperson of the Kanu in Embakasi, Nairobi.

“I was elected the chairperson of Kanu in Embakasi when the party was very strong. During those days, being the chairman of a political party, one had to be voted for.

“In Embakasi, we held an election, and I was voted the chairperson. Until today, I am still the party’s leader in Embakasi. There has never been any subsequent election to remove me from office,” Waititu stated.

The former governor insisted that he was elected the same time President Uhuru Kenyatta was voted the party’s national chairperson in 2005.

“I want people to know that I am attending this event today because I am a Kanu member. I have not lost my way as some people would think. When some journeys end, I choose not to lament, but take a U-turn and continue with my trip.

“Mr chairman (referring to Gideon Moi), I want to assure you of my support, knowing too well the party is safe in your hands,” Waititu stated.

On his part, Kanu Secretary-General Nick Salat stated that the party’s current objective was to have more campaigns to make the party more popular.

While addressing Senator Moi, Salat stated, “Your late father Daniel Moi was buried by Kenyans and not members of the Kalenjin community.”

“You were given Mzee’s rungu that symbolised the power he wielded across Kenya. You do not belong to Kalenjins only, you belong to Kenya,” Salat added.