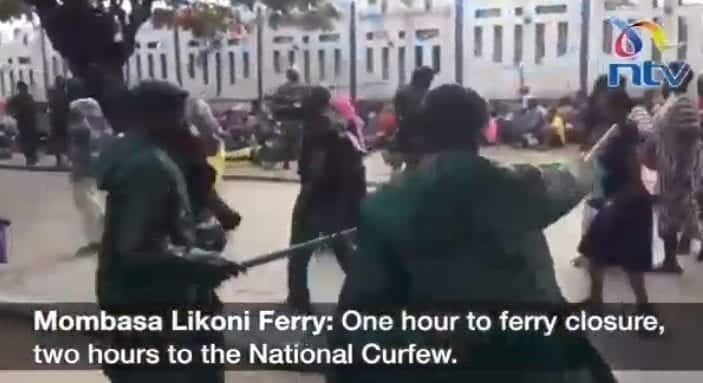 Police brutality ushered in the coronavirus curfew for Coast and Eldoret residents as cops descended on hapless citizens two hours before the deadline.

Not spared were media personnel with Nation Media Group television cameraman Pater Wainaina being clobbered by a police officer, as he struggled to perform his duties.

The brutality of the journalist, which was roundly condemned by the Kenya Editors Guild (KEG) and Kenya Union of Journalist (KUJ), came as a shocker as the crew were recording the new measures the police and Coastguard had effected at the Likoni Channel.

“I was actually doing my work and the brutality meted on me by the policeman caught me surprise. I did not provoke him, and it was uncalled for,” Mr. Wainaina said.

Coast regional police boss Rashid Yakub apologised for the incident, terming it unfortunate and uncalled for.

“Please advise the journalist to record a statement at the Central Police Station in Mombasa, get an Occurrence Book (OB) number so that we can take appropriate action against this officer. We do not condone such incidents, and his actions have no place in the force,” Mr. Yakub said.

Churchill Otieno, the president of Kenya Editors Guild said that this wasn’t an officer of the law, but a criminal.

“We demand that he is immediately disarmed and prosecuted in a court of law. The public have a right to timely, accurate information hence journalists must be allowed to wor,” Mr. Otieno said.

The KUJ Secretary General Eric Oduor said that this was another unfortunate incident which showed police’s low value for the work journalists do.

“This is a matter we shall revisit and report it to Independent Police Oversight Authority (Ipoa) and the Inspector General (IG) Hillary Mutyambai for action. We will go for these specific police officers caught assaulting journalists. This is a classic case where will use to settle this. We have the footage of the said officer, and we will want action taken,” Mr. Oduor said.

The Police officers also went on another brutality spree, beating up hundreds of ferry users who had who were lining up to get into the ferries at the Likoni Channel.

The officers who were armed with batons beat the commuters after they crowded and tried to force themselves towards the Likoni Channel.

The commuters complained they were getting late as the curfew time was approaching.

The officers hurled teargas cannisters at the crowd as they mercilessly beat up the people seriously injuring them.

Women who were caught in the melee were left with tears after they were beaten and frogged marched by the irate officers.

A stampede occurred as the hundreds of the pedestrians were forced back to the line that has stretched past PCEA church and meandered within Kizingo streets.

During the better part of the day, police have been forcing commuters to line to allow them maintain the 1.5m social distance once they get into the ferries.

The measure has been announced by the government in its effort to deal with the spread of coronavirus.

On Thursday, Coast regional commissioner John Elungata said there will be no ferries at night.

Mr Elungata said that ferries will be available as from 5.30am to 6pm in the evening.

During peak hours, he said three ferries will be available to carry pedestrians only and the fourth vessel to ferry vehicles only.

Meanwhile, police officers lobbed teargas at harmless wananchi who were rushing home along Kenyatta Street in Eldoret town at around 6pm.

The officers were patrolling the streets asking people to go home.

Most of them were caught unawares as the officer threw teargas canisters unprovoked.

By MOHAMED AHMED and  ALLAN OLINGO

Confusion as Kenyans try to beat curfew in Mombasa