The head of the World Health Organization (WHO) on Monday condemned in the “strongest possible terms” suggestions by two French scientists that Africa be used as a testing ground for a coronavirus vaccine.

WHO director general Dr Tedros Adhanom Ghebreyesus, speaking at a WHO video press conference, termed the comments racist and a hangover from the “colonial mentality.”

“Africa can’t and won’t be a testing ground for any vaccine,” he said.

Without mentioning any country by name, Tedros also noted that some states are considering the use of both medical and non-medical masks in public to prevent the spread of Covid-19, an issue raised at each WHO press conference.

The remarks by two French doctors last week during a live TV debate have sparked wide outrage, with accusations they are treating Africans like “human guinea pigs.”

When asked about the doctors’ suggestion during the WHO’s coronavirus briefing, Dr Tedros became visibly angry.

“It was a disgrace, appalling, to hear during the 21st Century, to hear from scientists, that kind of remark. We condemn this in the strongest terms possible, and we assure you that this will not happen,” he said.

“When we needed solidarity these kind of racist remarks will not help. It goes against the solidarity. Africa will not be a testing ground for any vaccine.” – @DrTedros in response to two French doctors suggesting a potential vaccine be trialed in Africa. 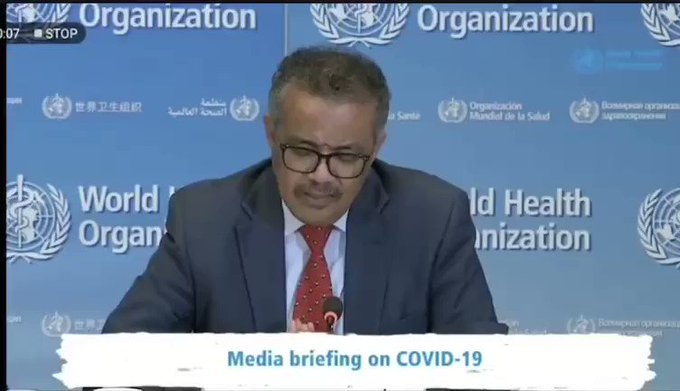 644 people are talking about this
Dr Jean-Paul Mira, the head of intensive care at Cochin Hospital in Paris, and Dr Camille Locht, the head of research at the Inserm health research group, both controversially suggested the coronavirus vaccine should be tested on Africans.

During the televised show, Dr Mira said the tests would yield better results when carried out in Africa where there are “no masks and no treatment” for the virus.

“If I can be provocative, shouldn’t we do this study in Africa, where there are no masks, no treatment, no resuscitation, a bit like it has been done in some studies in Aids, where among prostitutes, we try things, because they are exposed,” Dr Mira said.

He had earlier questioned whether the study would work as planned on healthcare workers in Europe and Australia because they had access to personal protective equipment to prevent them from catching the virus.

Dr Locht agreed with Mira saying, “We are in the process of thinking about a study in parallel in Africa.”

Since appearing in Wuhan, China in December, the novel coronavirus has spread to at least 184 countries and regions, according to figures compiled by US-based Johns Hopkins University.

Over 1.3 million cases have been reported worldwide, with the global death toll nearing 74,000, and more than 275,800 recoveries.