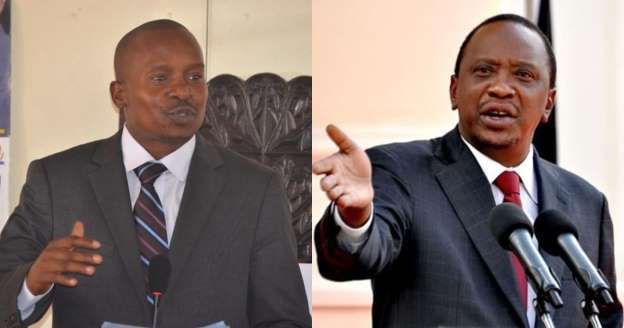 It took a mid-day meeting at State House to seal the fate of Tharaka-Nithi Senator Kithure Kindiki, who on Friday became the first-ever deputy speaker of the Senate to be removed from office through a resolution of the House.

A defiant Prof Kindiki had resisted a week-long behind-the-scenes push from lawmakers to spare himself the embarrassment and resign to avoid a protracted, if emotional, debate as witnessed in the House yesterday.

The House voted overwhelmingly to kick out one of the best senators and perhaps the best Speaker they ever had.

President Kenyatta, egged on by the “handshake” team, struck another painful blow to his deputy William Ruto in their war for the control of the Jubilee Party and national politics.

Of the 67 senators, 54 voted to kick out the deputy speaker, whom they accused of disloyalty to the Jubilee Party and disrespect to its leader.

Twenty-six of the senators from the minority side voted in favour of his removal. Only two – Bungoma’s Moses Wetang’ula and Nominated Senator Judith Pareno – did not cast their votes, as they were not in the House.

But Mr Wetang’ula, who is on quarantine after his brother died of Covid-19, supported the removal motion in a message to Minority Leader James Orengo.

Only seven senators voted to save Prof Kindiki, a far cry from the tussle of numbers that the pro-Ruto allies have always touted.

When he took to the floor, Prof Kindiki rejected claims that he has ever been disloyal to the President and the party.

“The President, whom I am being accused to have disrespected, should know that I have always and will forever respect him. I hold him in the highest esteem and veneration as the leader of our country and the symbol of the unity of our nation,” he said.

“In my previous responsibility as Senate Majority Leader, I did my best to push government business in this House and to defend the President and his administration whenever they came under political attack.”

With Friday’s victory, the President, and by extension the “handshake” team, reaffirmed his power over Dr Ruto and his allies, christened Tangatanga.

Thing could get even murkier, with reports on Friday that the President has summoned a Jubilee Party parliamentary group meeting for June 2 to chart the next course of action.

Mr Orengo’s sentiments on the floor left no doubt that the tussle was not about Prof Kindiki but between President Kenyatta and his deputy.

Mr Orengo, who constantly clashed with Murkomen about procedures on the motion, challenged the majority side to decide on whether they wanted to support the President or his deputy.

“You must agree on whether you want to support Caesar or Rasputin,” he said, referring to the two leaders.

“The difference between the two is causing havoc and getting a solution is what will end what is happening.”

He told the House that the country has become dysfunctional because of the war between the President’s allies and those of his deputy, adding that the Nasa coalition had decided to side with the President to save the republic.

“The Rasputin is holding an AK-47 and he has many messengers and agents as we can see in this House. You can’t have two generals in the field,” he said. Turning to Kindiki, he said: “This is not your day. It is a bad act but for a good reason.”

Earlier, two buses pulled up at the public car park of Parliament at about 10am, followed closely by two cars attached to State House Deputy Chief of Staff Njee Muturi.

At that time a number of senators from both sides of the aisle who support President Kenyatta had assembled at the office of Majority leader Samuel Poghisio.

The lawmakers, numbering 51 according to our source, took the buses to State House, followed closely by Mr Muturi.

At State House, President Kenyatta was waiting. The meeting didn’t take long. He had a brief message for the lawmakers, imploring them to support Prof Kindiki’s removal for the sake of the constitutional agenda.

“The message was short and clear,” said a senator who attended it. “They told us the coming days are crucial in constitutional reforms and we must clean the House by removing all those who don’t conform to their agenda.”

The President is said to have promised to revive the senators’ oversight kitty that was quashed in June last year but expect “two more assignments in future”, which were not specified, save for the hint that one would be a “political item” and the other related to his legacy.

The lawmakers proceeded to a city hotel where they had lunch. Jubilee Secretary-General Raphael Tuju told the Saturday Nation that the lunch was a meeting point before they headed to the House.

As a concession to the Raila side, ODM was given an option to choose the next deputy speaker. There were conflicting accounts on the kind of deal the minority walked away with.

On the one hand, ODM’s Stewart Madzayo and Judith Pareno were mentioned as the likely frontrunners to replace Prof Kindiki. Other sources indicated that Minority Whip Mutula Kilonzo could just be what the doctor ordered.

According to one source, the decision to settle for Kilonzo Junior is meant to create space for Narok Senator Ledama Olekina, who could be elevated to the position of Minority Whip.

Mr Olekina has been at odds with the his party ODM after he went against the grain to clinch the post of chairman of the House watchdog committee, the County Public Accounts and Investments Committee.

The party had picked Kisii Senator Sam Ongeri for the position, but Mr Olekina hammered a deal with a section of Jubilee senators allied to Dr Ruto, which saw him overturn the apple cart.

ODM rejected the outcome, saying it was not part of its plan and went on to remove the Narok senator from the committee, which considers the audited reports of the 47 county governments.

The senator rejected the push and filed an application and obtained a High Court order stopping the party from throwing him out of the party. The matter is pending in court.

Perhaps the sign of the times was during the debate when Olekina assured Mr Odinga of his loyalty and vowed to remain in ODM and fight for his space from inside.

“What we are facing is a party loyalty issue. I don’t ascribe to the idea that we should blindly disrespect our political parties because of democracy. Your goose is cooked,” Olekina told Prof Kindiki when he rose to contribute to the motion.

“When the party has made a decision there is very little we can do to change that as a House. The only thing you should have done is to show that you are loyal.”

Apart from solidifying the President’s stranglehold on the party, the victory has strengthened his base and given him a bigger leverage against his deputy, whose camp has been insisting that it has the numbers in both Houses.

What should injure Ruto and his team even more is not that Prof Kindiki lost.

It is the fact that one line he has been hanging on in his contest with the President was found wanting when it confronted the most important test.

Even if he has had the numbers in the House, the quick way the numbers are evaporating should be a cause for worry as the country stands midway to the 2022 General Election.