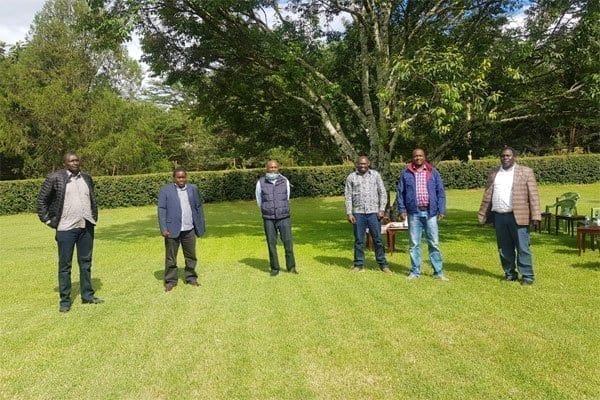 Nearly a week after independence party Kanu signed a post-poll deal with the ruling Jubilee Party, the outfit has now embarked on preparations to reap from its newly formed coalition and consolidate it’s support base in the Rift Valley region.

The Baringo Senator Gideon Moi-led party is out to wrest Rift Valley from Deputy President Dr William Ruto’s stranglehold with Senator Moi on Sunday playing host to five leaders from the region in Kabarak in a five-hour long meeting.

Although the details of the closed-door meeting were scanty, a brief statement from Senator Moi’s office said the leaders consulted on the current state of affairs in the country and how to cushion local residents from the adverse effects of the Covid-19 pandemic.

“Today Senator Gideon Moi held a five-hour consultative meeting with leaders from Rift Valley at the Kabarak home of the late President Daniel Arap Moi. The discussion centred on the current political happenings in the country,” read part of the statement.

In attendance were Elgeyo-Marakwet Governor Alex Tolgos, MPs Joshua Kutuny (Cherengany), Silas Tiren(Moiben), and William Kamket (Titty) as well as former East African Community Minister Musa Sirma. A source privy to the meeting told the Nation that the meeting was to deliberate on the new political relationship with Jubilee.

“As Kanu we desire to have a country where our point of reference shall be our nationality rather than tribal groupings. We need to stick together as we did during the fight for independence,” he said.
He described the Building Bridges Initiative (BBI) as the vehicle through which national unity would be achieved as it addresses issues that have always divided Kenyans.

“The BBI has given the country an opportunity to move forward as one. As Kanu, we believe in Senator Moi who is our leader and we shall be behind him in this journey ,”added Mr Kimani.

Kanu, which has been operating without a formal pre-election agreement with President Uhuru Kenyatta’s Jubilee as required by law since 2017, last week signed a deal which will see it play a key role in the 2022 succession.

Although Kanu has been voting with Jubilee and has its members seconded to House committees by virtue of Jubilee’s party strength, Jubilee Secretary-General Raphael Tuju said the pre-election agreement was not official and had not been filed with the Registrar of Political Parties.

Senator Moi and the DP have for long had a protracted battle to control the Rift Valley vote ahead of the 2022 polls. Already, Kanu has intensified a grassroots campaign drive n in a bid to solidify its popularity.

The Nation has established that even after public gatherings were banned due to the Covid-19 outbreak last month, Kanu went ahead to roll out a series of online campaigns seeking to revamp itself ahead of the 2022 General Elections.

Leading the drive is a group of youthful faces allied to the party under the banner “Youth for Kanu” led by Mr Kimani Wa Kimani and that is similar to the “Youth for Kanu 92” movement.