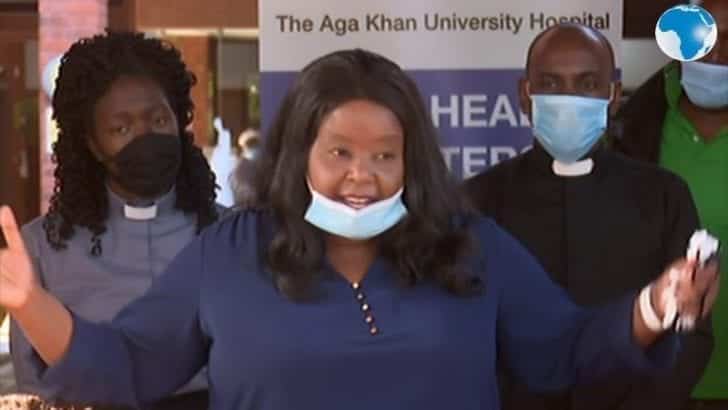 Former Starehe Member of Parliament Bishop Margaret Wanjiru was on Saturday, May 30, discharged from the hospital after successfully being treated and healed of Covid-19.

Seemingly in high spirits, the politician addressed a press briefing at Aga Khan hospital in Nairobi, where she assured that she had fully recovered from the disease.

“I have received very good treatment from the doctors here and I’m grateful that I am well now,” she stated.

Wanjiru revealed that she experienced stomach discomfort after eating spoilt food.She experienced diarrhoea and went to see the doctor.

She stated that she suspected food poisoning and while being treated for the infection, the doctor advised her to get tested for Covid-19.

VIDEO: Trouble at Mudavadi Rally as Sakaja and Bishop…

“I didn’t go to the hospital because of the flu or a cough, I came here because of food poisoning, and after two days is when I was tested for Covid-19 and found to be positive.

“It is the quick response that saved my life,” she told journalists.

Wanjiru revealed that she had been declared Covid-19 free after two tests were conducted confirming her status.

The politician described her experience at the hospital as pleasant, commending the staff for the treatment she received.

“Let me just say everything here was superb. The food was good,” she added.

She further advised people to take proper precautions adding that those infected were people in her home, not a prayer meeting as alleged by a section of the media.

“Only members of my family were infected and home staff. I was positive, together with two of my grandchildren and six of my staff,” she disclosed.

Wanjiru further noted that while receiving treatment, he was kept completely separate from her grandchildren, who were also in the hospital.

She pleaded with Kenyans to use masks on all occasions especially at home suggesting that a member of her staff could have been the source of infection.

The Bishop stated that she was going to give a special thanks to God for healing her while advocating for everyone to take caution and treat the disease like any other disease.

During the daily press briefing, Health CAS Dr Rashid Aman confirmed that diarrhoea was one of the symptoms caused by Covid-19.

“It has been stated by medical professionals around the world that diarrhoea and vomiting were reported as some of the symptoms caused by the disease,” he explained.

Bittersweet Homecoming for Kenyan Diaspora Artist after Years in USA