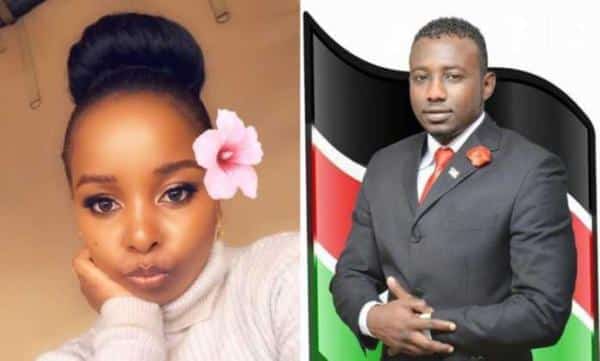 Saumu Mbuvi, daughter to Nairobi Governor Mike Sonko, on June 10, confirmed that she is set to walk down the aisle with her fiancé Lamu Senator Anwar Loitiptip.

The governor’s firstborn daughter opted to remain coy over the actual date, with the couple choosing to keep that little detail to themselves for now.

Speaking to Kenyans.co.ke, Jacob Elkana, the director of communications at the governor Sonko’s office also remained mum over the intimate details of the wedding.

Saumu first broke the news of her impending nuptials on her Insta-story section, sharing a video recording of herself riding alongside the Lamu senator.

The two lovebirds have been an item since 2019, and on March 8, 2020, they welcomed a bouncing baby girl, Saumu’s second-born.

“Today morning we were blessed with a beautiful baby girl. And it still happens to be my first born’s birthday as well as Women’s day. I am more than grateful to God for all His blessings,” she posted on the day the couple welcomed their daughter to the world.

She could not contain her joy as she went on to shower her newborn with messages of love.

“The day I became a mother way the most magical day of my life. My princess your birthday will always be a very special day for me. On this day, I wish that every day of your life brings new happiness to you. Have a wonderful birthday, my baby doll! Mama loves you,” wrote the governor’s daughter.

Interestingly, her firstborn baby girl, from her former relationship with Benson Gatu, was also born on March 8.

Saumu has come a long way since then, having confessed to being in an abusive relationship before the Senator swept her off her feet.

Speaking with Radio Jambo‘s Massawe Jappani on September 3, 2019, the businesswoman revealed that she was a victim of domestic abuse in a previous relationship.

“We started as friends and dated for nine months and we broke up when I was heavily pregnant. He used to beat me and after sharing with friends I went to my dad and told him I couldn’t take it any more,” she disclosed.

After informing her father, Sonko didn’t get violent with her then-boyfriend.

“He sat me down asked me what I am planning for life, and told me I am going to be a parent, and wants to see the best in me,” she added.

Saumu and Senator Anwar made the national headlines on June 2, 2019, when they were attacked by unknown assailants at Memphis Memphis Lounge – a popular club located along Thika Road.

The Senator was rushed to Aga Khan Hospital where he was admitted after sustaining injuries.

A year down the line and the couple are now set to tie the knot.

The process of students relocation to USA via Kenya Airlift Program

Word of the Day:The well-rounded believer