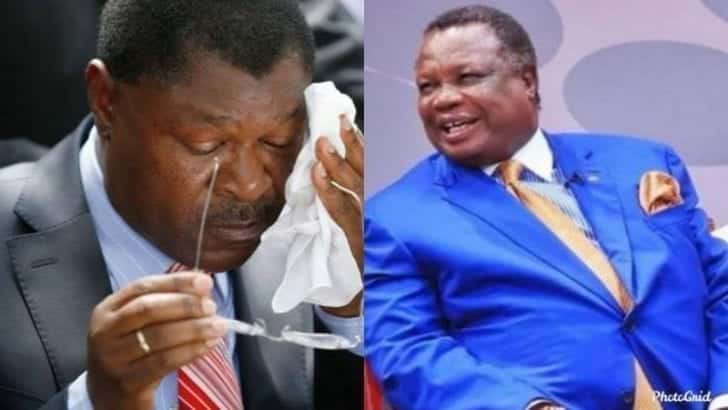 Was Bungoma Senator Moses Wetang’ula’s goose cooked at a luncheon hosted by Cotu Secretary-General Francis Atwoli at the weekend?

Is it part of the larger succession plot at play in the country? These are questions that went through Mr Wetang’ula’s mind as he tried to absorb the palace ‘coup’ that took place Sunday morning, dethroning him as Ford-Kenya’s party leader.

The politician, despite brushing off the move, blamed his woes on Mr Atwoli, a claim echoed by Amani National Congress leader Musalia Mudavadi.

According to him, the Ford-Kenya ‘coup’ was a well-orchestrated move that did not start recently but was planned for days, in order to cow him and Mr Wetang’ula.

Commenting on the ‘coup’, Mr Mudavadi said the move was calculated to “destabilise all independent minded political leaders”.

In an apparent reference to ODM leader Raila Odinga, he added that the scheme had been escalated at a number of meetings led by the “leader of a Nasa member party”.

Reacting to the ouster, the senator said plans to kick him out had been hatched on Friday during a meeting of western Kenya leaders at Mr Atwoli’s Kajiado home.

“You don’t need to be a rocket scientist to trace what happened (his removal) at Mr Atwoli’s Kajiado home. Picking leaders for the communities in western, in Kajiado, is cowardice,” Mr Wetang’ula said.

Leaders from the region picked Mr Atwoli, Devolution minister Eugene Wamalwa and Kakamega Governor Wycliffe Oparanya as the spokesmen. The meeting was skipped by both Mr Wetang’ula and Mr Mudavadi.

But in his characteristic way, Mr Atwoli dismissed the claims as cries of leaders who always blame others for their woes.

He said Mr Wetang’ula is an unprogressive force who likes complaining about everything and everybody, except his own flaws.

“The meeting that propelled Mr Musalia Mudavadi to the leadership of the Luhyia community in 2016 started in this home,” he said, alluding a series of meetings that culminated in the coronation of the ANC leader as the spokesman on December 31, 2016 at Bukhungu Stadium.

“I remember Mr Wetang’ula refused to be part of the meetings and went on to skip the Bukhungu meeting. He was accusing me of using Mr Mudavadi to undermine him. What has changed?” He posed.

The Cotu boss said he was not surprised by such claims. “He was born to complain. Even in the Senate he hardly votes with progressive forces. But as his senior and elder, I will not engage him any further. This time he has serious problems in his party. I wish him well,” said Mr Atwoli

The war of words erupted after a section of the Ford-K National Executive Committee voted to kick out Mr Wetang’ula and organising secretary Chris Wamalwa from office for gross violations.

The senator is accused of failing to be a symbol of national unity, failing to champion the party’s campaign to unite the country, win elections and form government as detailed in its constitution.

He is also accused of having interfered in the 2017 party nomination process and failing to reconcile warring members.

Kanduyi MP Wafula Wamunyinyi was picked to replace Mr Wetang’ula in an acting capacity, while Ms Josephine Maungu will act as the organising secretary pending ratification by the National Delegates Congress.

“I thank the NEC for the confidence they have shown in me, and I promise that I will endeavour to fight for the ideals for which this party was formed,” Mr Wamunyinyi said, as the party plans to capture power in 2022.

“We took this decision because we want to be part of ongoing political realignment at the national level. We support the BBI process and the handshake,” Governor Wangamati said.

CLUTCHING AT STRAWS
He, however, dismissed claims they had decided to execute the coup after the Friday meeting. “The Friday meeting was about a particular region. The Ford K Nec involves all the 47 counties. It is not logistically possible to plan a NEC in one day,” he said.

But in a move that has echoes to the political situation in Congo in 1960 in the struggle of power between PM Patrice Lumumba and President Joseph Kasavubu, Mr Wetang’ula quickly assembled his own NEC and announced a purge of their own.

They declared they had removed Mr Simiyu as secretary-general and Mr Wamunyinyi as Livestock and Agriculture secretary.

But Dr Simiyu dismissed the move. “What the former Party Leader is saying about suspending Dr Eseli Simiyu and Hon Wafula Wamunyinyi is neither here nor there. He is only but trying to save face. One thing is clear – his goose is cooked. As matters stand right now, he has neither standing nor authority to institute the said changes. Even worse, the purported changes have in fact no basis in the party constitution.”

Their places were taken over by Kiminini MP Chris Wamalwa and Mugirango West MP Vincent Kemosi.

Mr Wetang’ula further announced that Ms Cynthia Mutere had been removed as the chair of the Women’s league after she joined the renegade group. She will be replaced by Roselyn Adambi.

“Political party coups are archaic and anachronistic to order. They are for cowards,” Mr Wetangula said, adding that the party’s NDC will meet once the Covid-19 pandemic is under control to elect new national office bearers.

“Let those interested in the seats file their nomination papers and we meet on the floor. I have done a lot for this party and I am confident I will be reelected.”

“I am not a member of Ford Kenya, but the party can be our partner if not my destination, and as such party auctioneers and/or swindlers must be kept at bay,” he tweeted.

In response to ODM as the cause of the coup, ODM secretary general Edwin Sifuna described Mudavadi as a coward and professional mourner.

“The cowardice that informs Mudavadi’s politics is such that he wouldn’t even mention the ‘leader of a NASA party’ he was making reference to,” Mr Sifuna said.

Mr Mudavadi has been holding meetings with politicians of different shades in the past few weeks, and Mr Sifuna noted they had neither raised any issue about it, nor begrudged him the right to chart.

“It is imperative in the same vein that he must let Ford Kenya members and officials chart their own future too.

Mr Sifuna defended Mr Atwoli, saying the Cotu chief held similar meetings to which he is holding now, and whose sole beneficiary at that time was Mudavadi.