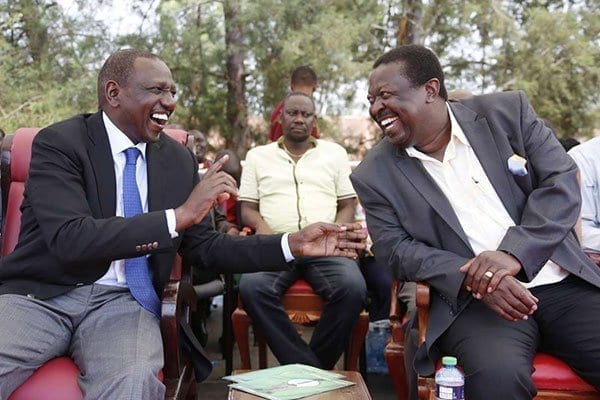 Last Saturday, DP Ruto said that Mr Mudavadi and the Luhya community owed him for supporting them during the 2007 General Election.

“There is no debt. We should not create a political ‘Zacchaeus’ who wants to collect political debts because they will be dangerous,” said Mr Mudavadi during an interview with a local television channel on Tuesday night.

Mr Mudavadi has, instead, asked Mr Ruto to make an appeal to the community to support him in 2022. The ANC leader, however, reminded the DP that he would also go for the presidency.

He said that leaders should not target individuals and communities over ‘political debts’.

“I am a competitor and I may come to ask him (Mr Ruto) for his support,” Mr Mudavadi said.

The former vice-president also denied claims by the Deputy President that they had a pre-election pact in 2007.

Mr Ruto said that as Orange Democratic Movement, they had agreed that he would be Prime Minister, Raila Odinga President and Mr Mudavadi vice- president only for him to be shortchanged.

“What Constitution were we dealing with then? Where are the documents? was I even part of the Serena talks. That is a hoax,” said Mr Mudavadi who refuted claims that Luhya community is divided.

The ANC party leader explained that the community has always remained united. He cited examples where the community supported former president Mwai Kibaki in 2002 and Mr Odinga in 2017.

“Whose narrative is it that Luhya community is divided? It is not good to vilify a community for being the most patriotic by voting for anybody,” he said.