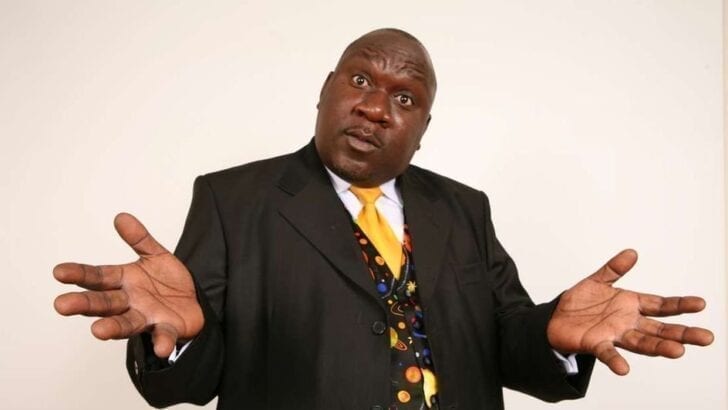 The body of actor Charles Bukeko, popularly known as Papa Shirandula, arrived at his Namisi-Bukeko village home in Nanderema, Funyula in Busia County in the wee hours of Monday morning ahead of his burial.

His body was transported from Nairobi, arriving at 3:40am Monday accompanied by two buses of mourners who were received by health officials who screened them under strict Covid-19 protocols.

Family members, friends, security and health officers had spent the night at the home waiting for the body as they sat around bonfires to keep warm.

While the burial attracted lots of attention in the area, health protocols were strictly observed, with mourners from Nairobi isolated in a separate tent erected at the far end of the compound.

Locals were strictly told not to mingle with them.

The body temperature and contact details of persons who accompanied the body were taken on arrival at Bukeko village, Samia. PHOTO | ISAAC WALE | NATION MEDIA GROUP

He will buried by 8am, health officials indicated.

The body remained in the hearse upon arrival, awaiting the burial time, with police and health officials keeping vigil.

Apart from health officials, police and a few close family members who were outside, the rest of the mourners were locked in their homes when the body arrived and watched through the windows.

The vehicles from Nairobi were fumigated immediately upon arrival.

Burial arrangements had commenced immediately he died on Saturday and his grave prepared on Sunday.

Ministry of Health officials and members of the county Covid—19 rapid response team on Sunday spent time outlining protocols to the family and mourners who had come to condole with them.

Only close family members would be allowed into the compound when the body arrived, they said.

Papa Shirandula will be buried at the family’s graveside behind his house and next to two of his siblings’ graves.

His father, Cosmas Bukeko Wafula, said the body will be buried facing the homestead in line with Luhya traditions so as ‘to guard the family from invasions.’

“I have been in consultation with government officials and health officials and they have agreed to bury my son by 8am on Monday,” he said.

A number of police officers were deployed to the home where they guarded the gates to ensure anyone coming in had a face mask and washed their hands at a water point placed strategically at the entrance.

His wife Beatrice Andega broke the news to his parents soon after he passed away at Karen hospital on Sunday.

She had called the family at 10am to inform them that he was seriously ill and was being rushed to hospital.

She would call again after two hours to break the shocking news.

Shirandula’s brother-in-law Ronald Wanyama said he experienced difficulty in breathing before he was rushed to the Karen Hospital.

“It is sad he didn’t make it out of the hospital alive. He had tested positive for Covid-19. We are devastated,” he said.

Mourners started streaming into his family home in Funyula Sub-county as soon as they heard.

His parents said the family had lost its main breadwinner.

“My son has been everything to us. He constructed all the houses in this home. He is the one who has been in charge of our eating. We even don’t know how electricity is paid yet there has not been any disconnection of power in this home,” his mother said.

Papa Shirandula’s death shook the Samia community in Busia where he hails from.

“We have a very big funeral in the area. Our brother who had put us on the national radar has left us,” said Peter, a bodaboda rider.

Born in 1963, Mr Bukeko was the first born in a family of 13 — he had eight brothers and four sisters.

He attended Busia Township Primary School and sat his Certificate of Primary Education (CPE) in 1977 before joining Budalangi Secondary School.

His father said he schooled at Budalangi for only one year and was transferred to Bukhalalire secondary school in Form Two.

“He sat his Form Four exams in 1981 and got employment with the Government Secretarial College as a clerk. He then worked at the University of Nairobi, Chiromo campus before he ventured into acting,” said Mzee Wafula.

The body of Papa Shirandula was laid to rest at 8:45am after the brief burial ceremony where his wife accused the Karen Hospital of negligence.

Shortly after, people were asked to leave the homestead.

The deceased leaves behind a wife and three children.

Accountability in orphanages and childrens’ homes