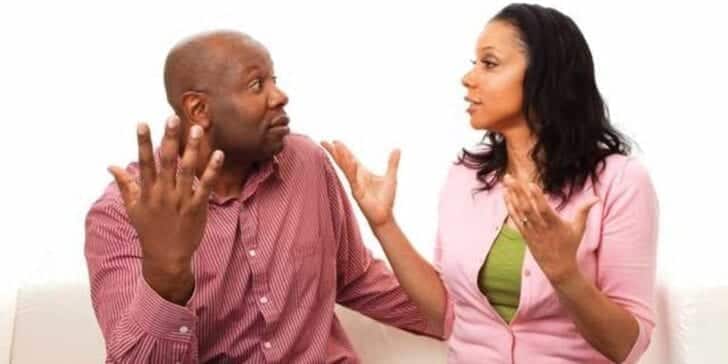 What you need to know:There is a difference between speaking out your feelings plainly and doing the same in love.

Thank you for the sober advice you give to couples. I’m in my late 40s, married for 17 years, and blessed with four children. People think we are a happy couple but all is not well.

I am a committed Christian while my husband is not. We used to be great communicators until about 10 years into the marriage, when he started accusing me of always contradicting him and being big-headed.

I learnt how to be humble and watch my words and expressions after attending Bible study meetings with like-minded women and things got better.

Would you? My serial cheat of a girlfriend wants me to marry…

Can’t take it anymore: I feel used by my married…

We both cheated. Can our marriage be saved?

Then someone lied to him that I was having an affair at work. I tried to defend myself but he almost walked out on me. We slept in separate rooms for a couple of weeks, then he relented and “forgave me”.

Later, I got a scholarship to study abroad. He seemed to okay with it. I used to return home twice a year. When I returned home after two years, things were so good that it felt like a second honeymoon.

However, I soon realised that I was shouldering all the household and childcare burdens. When I tried to talk to him about this, the fights started again. Silent treatment for two weeks or more became the norm. He accused me of becoming “big-headed and stubborn” after my return.

The truth is I changed a bit. I wanted to be more involved in decision making, rather than just doing secretarial or social duties.

We saved money to start an income-generating project but he diverted the funds elsewhere. When I questioned this, he said I was being unsupportive. We have had fights about whether to go out on dates like we used to.

He thinks that if we go for a function like a funeral, I should consider that a night out, as we would be away from the children!

We fight about sex, basically, it must go his way, and I should be satisfied with this. He spends nights out sometimes but does not want to be asked about it.

I have suggested counselling but he says men do not discuss their issues with other men or women where he comes from.

He’s forbidden me from talking to both our families about it. I don’t believe in separation.

But he expects me to live in a box while he has everything in life to his benefit or advantage, so how can I avoid feeling bitter and cynical?

What most spouses forget is the investment they made during their early years. As the relationship grows and the family expands, couples invest less and less in themselves. If couples don’t work together in bringing up their children, it can be very lonely, confusing and discouraging.

When we fail to learn how to communicate and resolve conflict effectively, we end up lacking this important skill that is essential in keeping objectivity in the relationship. Most spouses end up putting up a show.

In addition, depending on upbringing and exposure, one or both spouses could totally derail the relationship by refusing to be accountable for suggestions that could lead to healing.

Some of the characteristics from this stage of marriage are constant denials, resistance, abuse, and distance from each other.

That is why being away from each other looked like things were better, but really, the issues had not been dealt with. Another characteristic is that, although a couple may be aware of the many differences they face, they lack the capacity to deal with these differences.

Toxic relationship signs
The relationship can slowly become toxic. A few pointers affirm this view: First is his refusal to seek any help from his family or friends.

Second is his desire to control and manipulate you into compliance. I worry about that because this is how all levels of abuse could begin.

The other issues you are encountering like sharing financial burden and meeting each other’s emotional needs are a spillover of the already difficult environment. There is also a mild but easily detectable game of outdoing each other. That is where this feeling of both of you being unsupportive comes from.

Here’s what I suggest
The fact that you are a believer will require that you look for a way to salvage things. First, I suggest prayer and personal reflection. What are the areas you think if you changed would improve how he feels about you? This could give you the opportunity to reach him. You have to look for ways of demonstrating your love the way Jesus would desire you to do without compromising your faith.

Second, who can you confide in that will help you process what you are facing and possibly give you the much needed different perspective? Maybe they could also help you pray. If so, this person should preferably be a woman. Third, speak the truth in love.

There is a difference between speaking out your feelings plainly and doing the same in love. Ask God to give you the wisdom of treating him the way Christ would want you to.

As for his resistance to anyone else knowing about your tribulations, I suggest the following. First, you could suggest that your desire is to see that the family is happy.

Second, agree with him that you have faith that if the two of you listened to each other, you will be able to deal with the issues you face. If he is in agreement, set guidelines on how each person can share their perspectives of what is ailing the relationship and what, if done, will bring healing.

I believe all things are possible to them that have faith and hope in their God-given wisdom and capabilities to resolve what they face.

My neighbour was in an accident. Help me encourage him

I’m a born again Christian and I need prayers for my neighbour. He was involved in a very bad accident. I usually encourage him by sending him scriptures to help uplift his spirit. I long to see him happy again. I need someone to help me stand in the gap of prayers for him. Please share a word of hope and encouragement for him. Thank you and be blessed.

I get very few questions like the one you have asked. Most people tend to ask about their love lives.

Your question is refreshing, and concern for your neighbour admirable. This is why Jesus told the story of the Good Samaritan.

We are relational beings who are called to live in healthy relationships with others. Great women like Mother Teresa were people like you and me, but they lived to make a difference in other people’s lives.

We show Christian charity through caring for our neighbours, just like you have demonstrated.

Drawn to the wounded

Jesus was drawn to the wounded and lost. He not only healed their bodies, but he also healed them spiritually.

As you desire to help him grow spiritually, I suggest that you do two things: First, introduce him to your local pastor who can help provide spiritual growth verses from the Bible. You could also find an older spiritual leader who could do the same. Second, if neither of the two are easily available, use the internet to search for spiritual growth Bible verses.

As you pray, ask that God will help you know how to walk alongside him. Second, do not force him to get born again. Finally, avoid compromise particularly when serving people of the opposite sex.

As Mother Teresa, urged, choose to remain faithful in small things because it is in them that your strength lies.

Being careful when helping people helps you ensure that you maintain your integrity as you demonstrate God’s love through your words and actions.

Photos: Eric Omondi and Owago Onyiro Having a Good Time In The US