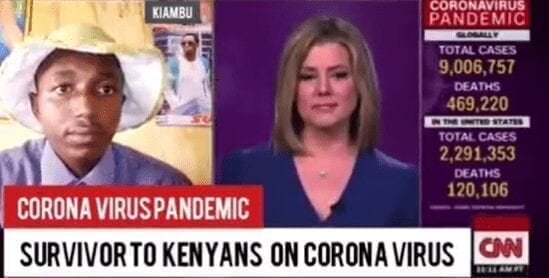 A Kiambu man who claims he recovered from coronavirus has left Kenyans in stitches after butchering the Queen’s language during what some thought was a CNN interview.

The video appeared to have been edited from an unrelated snippet of a live interview that was hosted by CNN’s Brianna Keilar.

The fast-rising online tickler was dressed down in a summer hat, a shirt and tie and attempted to give a hilarious recap of his triumphant battle with the coronavirus.

I am done with Kenyans 😂😂😂 pic.twitter.com/SnTXIyXFh9

“Let me first return many many thanks for inviting me to speak inside a television (sic), you are catching me one on one from Kiambu Kenya, today I’m feeling hot like lack of importance,” he said in part.

Without even blinking, Kiambu man went on to narrate how he discovered he was infected with the virus after a dizzy spell at work.

“I was at the Mutura base when my head started biting me and I thinked it was because I had not drinken tea in the morning, I started feeling English English (sic) and decided to go to the hospital,” he added.

The video which appeared legit even got some Kenyans confused with journalist Rasna Warah Tweeting her disapproval at the interview which according to her, ”made no sense at all”.

The video which has been dismissed as a fake however made for a delightful comedic break, with Kenyans lauding the comedian’s creativity.

See some reactions to the video on social media:

VIDEO: Obama Ask Bandaged Museveni if he had Punched Someone

Legal U.S. immigrants may be scared to sign up for benefits

Kenyans in diaspora have little of hyena spirit