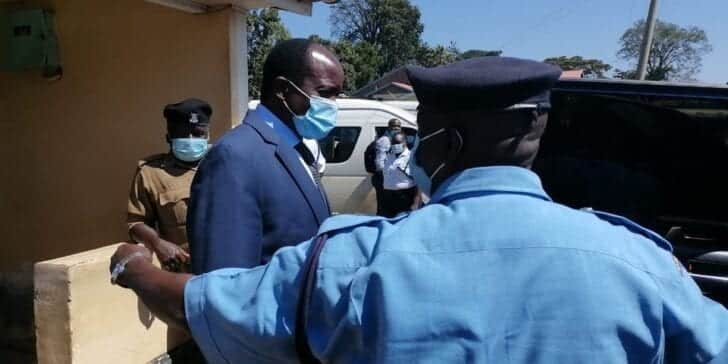 Migori Governor Okoth Obado was arrested on Wednesday after three hours of grilling by Ethics and Anti-Corruption (EACC) officers in Kisii.

This is after he surrendered himself at EACC offices located along the Kisii-Kilgoris road, escaping imminent arrest for allegedly stealing public money.

Director of Public Prosecutions (DPP) Noordin Haji had on Tuesday approved charges against him and some of his family members after agreeing with findings of the EACC.

“All is okay,” Mr Obado told journalists as he left EACC’s offices for Nairobi were he and the other suspects are set to be charged in court.

Mr Obado, who is serving his second term in office, arrived at the EACC offices at around 8.30 am accompanied by his children, relatives, aides and some county staff.

Journalists, Obado’s supporters, friends and relatives were locked out of the compound.

After he was grilled, the Governor was placed under arrest along with four of his children.

His children — Susan Scarlet, Jerry Zachary, Evelyn Adhiambo and Dan Achola Okoth — put on a brave face as they were escorted by police officers to vehicles that took them all to Nairobi.

EACC has been investigating the Migori county boss following reports that he stole public funds through companies registered by his relatives.

According to the DPP, the governor indirectly received Sh73.4 million from companies that traded with the county government during his first term in office.

Sources at EACC say that 10 of the 11 suspects who surrendered themselves for grilling today were arrested and transported to Nairobi under heavy police security.

According to the DPP, the four children separately received Sh34.5 million from Mr Obado’s companies and three brothers, who acted as proxies in some firms the county boss owned.

“Public money was lost through connivance of the governor and the business entities in payments made for performance of contracts,” Mr Haji said in a statement yesterday.

The EACC audit trail shows that the companies wired Sh38.9 million to three of the governor’s children, which was used to pay their school fees, upkeep, maintenance and medical bills in Australia, Scotland and the United Kingdom.

“Some of the money was used to buy two Toyota Land Cruiser V8s,” said Mr Haji.

Gideon Moi ‘betrays’ opposition after voting for the electoral laws

VIDEO:ALCOHOLISM IN THE DIASPORA – A CANDID CONFESSION

Raila at crossroads as disputes divide Luo elders ahead of polls