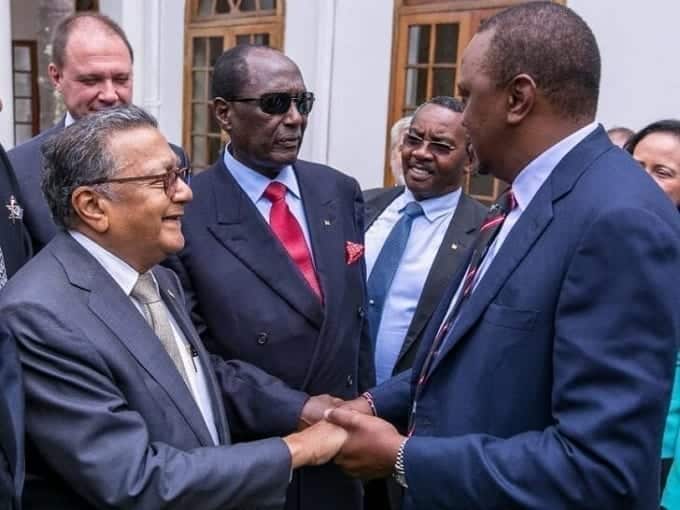 Generating a net worth of $1.7 billion, Manu Chandaria is the richest man in Kenya. He is  is a Kenyan businessman of Indian descent.
Along with being a senior member of the Comcraft Group of Companies, a billion dollar enterprise that has a presence in over 40 countries, he is on the boards of several prominent East African companies.

He has won several awards in East Africa and internationally in recognition of his entrepreneurial endeavours and is also a noted philanthropist.
In 2003, Chandaria was awarded the Order of the British Empire (OBE) by Queen Elizabeth II.In December of the same year, he was awarded the Elder of the Burning Spear by former president Mwai Kibaki, one of the highest civilian honours in Kenya.
He has been hailed as “one of Kenya’s leading industrialists”

The Richest Man in Kenya Number 2

We may have gone out of our article title a bit but Mama Kenyatta is worth mentioning here.
Mama Ngina“, is the former First Lady of Kenya. She is the widow of the country’s first president, Jomo Kenyatta (~1889–1978), and also the mother of President Uhuru Kenyatta.
In the 1970s, she and other high-level government officials were allegedly involved in an ivory-smuggling ring which transported tusks out of the country in the state private airliner.
A May 1975 edition of New Scientist cited her as one of Kenya’s “ivory queens” but also asserted they could not be completely certain that these claims were true.
However, New Scientist claimed that there was now documentary proof that at least one member of Kenya’s royal family had shipped over six tons of ivory to Red China.

Bhimji Depar Shah, is a businessman, industrialist and entrepreneur.
He is the founder and current chair of BIDCO Group of Companies, a Kenya-based, family-owned manufacturing conglomerate with businesses in 13 African countries

The Richest Man in Kenya Number 4

Merali is the founder of the Kenyan mobile service provider Kencell along with French media giant Vivendi.
As one of Kenya’s leading industrialists, Merali has brought commercial development in Kenya for more than 30 years and is constantly expanding his businesses throughout East Africa.

Uhuru Muigai Kenyatta is a Kenyan politician, businessman, and the fourth and current President of the Republic of Kenya.
He served as the Member of Parliament (MP) for Gatundu South from 2002 to 2013. Currently, he is a member and the party leader of the Jubilee Party of Kenya.

Christopher John Kirubi is a Kenyan businessman, entrepreneur and industrialist. He is a director at Centum Investment Company, a business conglomerate, in which he is the largest individual shareholder.

The Richest Man in Kenya

Peter Kahara Munga is a businessman and entrepreneur in Kenya, the largest economy in the East African Community. He is the immediate past group chair of the Equity Bank Group, the largest bank holding company on the African continent, by customer numbers, with over 9.2 million customers as of 31 June 2014.

Facts by courtesy of GLUSEA.