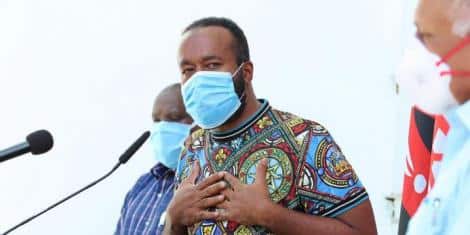 A letter purported to be authored by Joho did rounds on social media for the better part of Thursday evening leaving Kenyans shocked. The letter contained an ODM letter head and a signature similar to that of Governor Joho.

In the letter addressed to ODM Party Leader Raila Odinga, Joho thanked him for the opportunity to serve as the ODM Deputy Party Leader.

“I believe during my tenure I served you and the party members diligently including organising for campaigns in different parts of the country including catering for expenses even as the party was experiencing tough economic times.

“It has been a learning experience for me and I do hereby tender my resignation as your deputy with a hope that you will give the youth another chance and also encourage divergent voices in how operation and relations in your party are carried,” read part of the letter.

Joho, however, came out to trash the letter. He further emphasized on the unity of the party by uploading an image of the letter and went ahead to emblazon it with ‘Fake News’.

The Mombasa Governor also went ahead to caption the image with a short message that read, “The party is strong.”

The ODM party responded to the letter by calling out detractors who they blamed for the alleged fake news.

The ODM deputy party leader is considered the most influential politician from the Kenyan Coast region where he has been instrumental in delivering votes for Odinga in the last three general elections.

He is also expected to play a key part in efforts to mobilize coast residents to back the soon to be released BBI report.

Joho has been rumoured to be setting his sights on the Presidential seat in 2022 as he has hinted in a number of occasions.

Among the key discussions in the meeting included the creation of innovative policies to boost the economic recovery strategy, especially supporting the SME sector.

This comes after rumours also spread of Suna East MP Junet Mohamed being expelled from the party. The MP responded by visiting Garissa Senator Yusuf Haji alongside Odinga to allay the allegations.