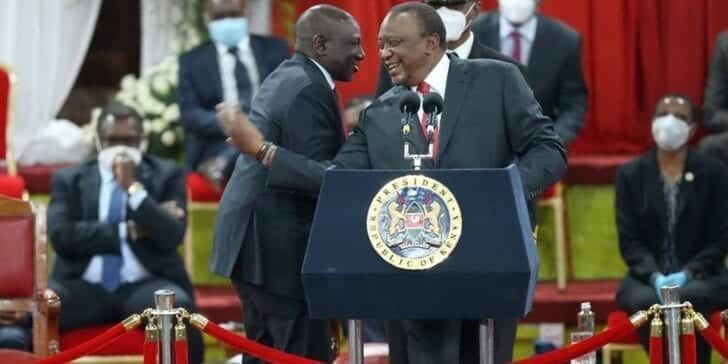 The campaign to amend the Constitution got underway yesterday following a charged ceremony at which Kenyans were exhorted to freely make their choice.

New revelations on the handshake emerged and leaders sparred about the messaging ahead of the 2022 elections.

President Kenyatta and ODM leader Raila Odinga clashed with Deputy President William Ruto in an afternoon of high drama at the historic Bomas of Kenya during the launch of the Building Bridges Initiative (BBI) report.

The two leaders used the occasion to deconstruct the hustler narrative by DP Ruto as the second-in-command stuck out his neck for his movement despite the boos and jeers from delegates in support of the BBI.

President Kenyatta disclosed that he briefed his deputy about his March 2018 truce with Mr Odinga, and that his deputy even helped him nominate his representatives to the BBI task force — two disclosures that sought to discredit the DP’s persistent attacks on the handshake and its subsequent product; the constitutional reforms proposals.

The Head of State even abandoned his written speech and chose a no-holds barred address, where he took on his deputy, occasionally looking at him when doing so.

The President admitted that the politicians, including himself, were to blame for the “mess” the country had found itself in, particularly with regard to tribal politics that stoked conflict every election. “The fact of the matter is, we’re a tribal society and we want to run from that. Let us not cheat one another. I’ll also admit that I’ve been part and parcel of the negative politics.

“That’s why we must address the issue of inclusivity so that every single community will feel they’re part and parcel of this country,” the President said, as he asked the audience whether it will help him rally support for the BBI nationwide, to which the crowd roared in the affirmative.

A source has told the Nation that President Kenyatta was forced to set aside his official speech after he witnessed the mood in the auditorium. None of the vocal DP’s allies who accompany him to rallies were present, most choosing to tear into the Bomas meeting via social media.

Mr Odinga fired the first salvo when he took a dig at the DP. He warned against the rich-versus-poor strategy, saying, it was dividing the country. A revolution of the masses cannot be led by the rich, he said, in an apparent response to the hustler narrative.

“We don’t want this divisive talk of the rich and the poor. And a proletariat revolution has never been led by the bourgeoisie,” Mr Odinga declared, drawing cheers from the delegates.

The ODM leader also accused the DP of hypocrisy for promising voters what he will do in 2022, yet he’s part of the current government.

“Do what you want to do now that you are in power. Wewe ni kama mtu umekuwa na bibi umezaa naye mtoto kisha tena unasema huyo sio mtoto yako (You’re like a man who sires a child only to disown him),” he said.

The former Prime Minister rooted for BBI, outlining its advantages and remembering those who contributed to the Constitution but have since died, including Odhiambo Mbai, and Nzamba Kitonga, who died this week.

A tense Mr Ruto sat with his legs crossed, occasionally uncrossing them and fidgeting. Mr Kenyatta, who was seated between them, watched amused.

When the DP rose to speak, his first target was Mr Odinga’s statement. “I hope you are not referring to me when you talked about the bourgeoisie,” said the DP. The DP raised six issues that he disagreed with in the report.

His hard-nosed submission also took on youth leaders who had spoken against his wheelbarrow initiative, which they dismissed as outdated and out of touch with the digital era.

“If my wheelbarrows are tools of the 16th century, why are they needed now?” he asked.

Mr Ruto braved the hostile reception to articulate his opposition to sections of the BBI report.

When he rose to speak, President Kenyatta said the DP had abandoned Jubilee’s shared dreams of uniting the country to pursue his 2022 political ambition. He told his deputy, whom he has often accused of premature campaigns, to relax.

“Hii ni relay unastahili kungoja uletewe baton. Lakini my brother William amepinduka amekimbia nyuma. Mwambieni ni mos mos (This is a relay race where you are supposed to wait for the one who has the baton to hand it over to you. But William has become impatient and has come for the baton. He is running in the opposite direction. Let him be patient),” the President said.

Misuse of the youth

At this juncture, Mr Ruto burst out laughing and went to fist bump the President at the lectern. President Kenyatta said the country should focus on ending electoral violence and misuse of the youth as he stressed investment in a growing economy.

The President insisted the DP had been part of the BBI process.

“It was not about 2022 elections, but an extension of what I and William started in 2013,” President Kenyatta said. “He’s here and you can ask him,” the President said as he turned towards the DP.

Surprise As Google Reveals Most Searched Presidential Candidate in July 2022